Back to Profile Gallery > VTTI Kenya

Opportunities for the future

With a capacity of 111,000 m3, ten tanks, one jetty and a maximum draft of 13.25 m, VTTI Kenya is one of the largest and modern facilities of its kind in East Africa. Operational since July 2013, it is the only privately owned terminal to tie into the Kenya pipeline in Mombasa; the pipeline takes product from Mombasa to Nairobi, before progressing further afield onto Nakuru, Eldoret and Kisumu. This available infrastructure in Western Kenya provides the terminal access to Ugandan markets as well as other land-locked countries found further west. 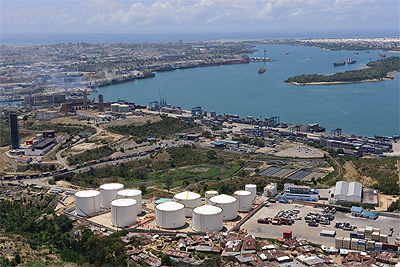 Discussing the relatively short but eventful history of VTTI Kenya, Jerome Gelineau, General Manager and Commercial Manager of the terminal, begins: “VTTI Kenya purchased this facility after clearance from the Ministry of Finance in December 2009 after which it spent about 16 months completing and expanding the initial set up. VTTI Kenya bought it because it was located in Mombasa, the regional hub for product imports and because of its connectivity with KPC and the perceived friendly investment climate in Kenya. The total investment cost was $60 million. Today the terminal handles Automotive Diesel Gasoil which is ultimately delivered by either pipeline and/or by trucks to Mombasa, Nairobi, Kisumu, Eldoret, Nakuru, Uganda, South Sudan, Eastern DRC and Rwanda.”

Created to ease the region’s overstretched oil storage and transportation network, the terminal is one of the largest liquid petroleum storage facilities in East Africa following major investment over 16 months. For example, phase one of developing the terminal included the installation of six tanks, while phase two include four additional tanks. The first phase was completed in March 2012, while the second phase was completed in final quarter of the same year. On top of this, the state-ofthe- art storage facility boasts new technology, including automated tank gauging, automated tank valves, fire suppression systems, cone bottom in all tanks to drain water, tank high level alarms, a high tech security system with 22 surveillance cameras and impervious tank containment systems. Furthermore, the facility is operated from a centralised control room through the utilisation of the very latest in terminal automation. Following these major developments, on January 23rd 2013 the terminal reached a major milestone when it was successfully commissioned after discharging 9600 m3 of automotive gas oil from MT Uzava for Vivo Energy Kenya Limited.

Relied upon by major organisations in the oil and gas industry, VTTI Kenya offers a range of advantages to those operating in the exposed Kenyan fuel import market, as Jerome highlights: “The major edge of this terminal is its excessively low operational loss which puts it far above the others. This is a key factor because operational losses translate in costs for the importer and the Kenyan people. Kenya normally has storage of only two weeks for automotive gas oil and one week for premium mogas. This means any shock that impacts the supply chain will be felt immediately, for instance if the Kipevu and Shimanzi Oil Jetties became inaccessible the country will run out of stock within one week. Utilisation of VTTI will have the following advantages for customers: It will increase the stock cover of the automotive diesel gasoil by more than 100 per cent. It will also reduce the demurrage costs as the large vessels will now be discharged within 42 hours without having to wait for ullage. Meanwhile, there are benefits for larger vessels as the price premiums will reduce due to the economies of scale.” 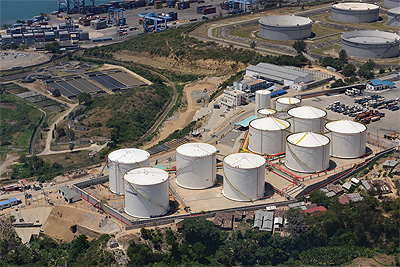 In July 2015 VTTI Kenya proved its capabilities in handling large vessels when it received its largest cargo from the 78,000 m3 oil vessel MT Hafnia Europe berthed at its terminal for oil discharge. The cargo was nominated for the terminal via the Kenyan governmentcontrolled Open Tender System, which tends to be reserved for cargoes destined for government controlled facilities that are used by all oil marketing companies in the region. “The arrival of MT Hafnia demonstrated the ability of VTTI to receive large cargoes efficiently as a flow rate of over 1800 m3 per hour was achieved. Also this cargo was loaded on to trucks and through the pipeline within a period of 30 days. This has shown that VTTI can be the solution for receiving large cargoes at low premiums for the country due to large cargo sizes and the fast discharge rate will also save the country demurrage as this rate is two times faster than other alternative terminals,” highlights Jerome.

While VTTI considers other potential investments in Kenya that will be located near the consumption centres and also connected to the KPC pipeline system, VTTI Kenya will be focused on creating a close co-operation between itself and KPC with the goal of being part of its ongoing investment programme. “The programme is aimed at increasing the distribution of all clean products to the Kenyan markets as well as markets further west,” explains Jerome.

“Kenya is at the centre of the different oil routes, whether for products import or for crude export, and has great opportunities to reinforce its position if it can seize them and quickly monetise them. However this will only be achieved if it can improve its business environment, especially as far as the land issues are concerned,” he concludes.