Back to Profile Gallery > Wagenborg Offshore

Established in 1998, the daughter company of Royal Wagenborg, Wagenborg Offshore provides various offshore services to the oil and gas sector under its two sub divisions – Wagenborg Foxdrill and Wagenborg Kazakhstan.

The company is ISO 9001, ISO 14001, OHSAS 18001, and ISM accredited, recognising its high quality standards. Wagenborg is a specialist in the provision of logistical support for offshore oil and gas projects, which involves the supply of project sites, icebreaking and nautical assistance, management, and towing services. The business also carries out complex logistical offshore projects in harsh conditions, such as those in the Caspian Sea, where Wagenborg offers a complete supply service with special icebreaking supply vessels in operation in extreme winter conditions and shallow waters. 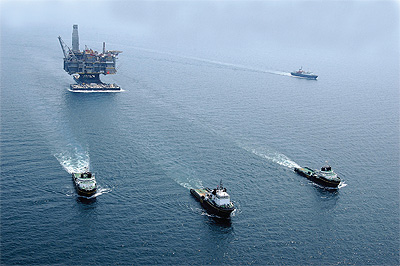 One of Wagenborg Offshore’s division, Wagenborg Kazakhstan, was set up after a consortium of seven oil companies began to investigate the possibility of launching oil exploration work in the northern part of the Caspian Sea. Wagenborg, with its expertise in navigating and carrying out installation work in shallow water and extreme ice conditions, was brought in to provide advice on the construction of a drilling island, as well as the development of a supply strategy and the delivery of two ice breaking supply vessels (IBSV). The IBSVs in operation in the Caspian Sea, Arcticaborg and Antarcticaborg, are specially designed for the conditions. Due to the combination of shallow waters and ice, it would be impossible to navigate conventional icebreakers in this area. With small draught and engine output, the two vessels are able to travel to drilling locations in the Kashagan field during extreme winter conditions. The IBSVs have been operating in this area since October 1998. These are now joined by four shallow draft tugs (SDT), which are used to tow cargo pontoons between the drilling locations and the supply base, and are specially designed for these types of towing activities in shallow water. Wagenborg Offhsore also operates three ice-classed barges, one multicat, one stan tug, six flattop barges and provides operational management for two accommodation units in the area.

An important aspect of the ice management service provided by Wagenborg Offshore is to maintain safe access to the drilling locations at all times. In the case of an emergency at one of the locations, the site may need to be evacuated as soon as possible, which is why the IBSVs are crucial to the continued work in the Caspian Sea. Conventional ice breaking – with the bow – is only possible when there is sufficient under-keel clearance. In areas with such shallow depths as the North Caspian, the broken ice floes will not get washed out, but instead get stuck under the vessel. At the end, the vessel will ground itself on top of the ice floes. The IBSVs are able to remove not only ice but also ice ridges from the drilling locations. Another part of the ice management programme is to encourage the formation of ice ridges at a safe distance from the drilling locations, creating a natural barrier against further ice movements.

Wagenborg also offers a wide range of services to the broader offshore oil and gas industry, including the transportation of bulk and deck cargo, fuel and water to drilling locations, onshore and offshore moving, the assembly and dismantling of drilling rigs, towing services, and pile driving of conductor pipes and foundations. Within each of these areas, a combination of shallow water in the northern part of the Caspian Sea and extreme ice conditions during the winter months means that Wagenborg must adopt an innovative approach to its operations. With over 100 years of ice navigation experience in the Baltic and Scandinavian waters, the Royal Wagenborg Group has amassed the right skills to deal with these harsh conditions in the most efficient manner possible.

The company’s other sub-division, Wagenborg Foxdrill, operates as a worldwide rigging company in the oil and gas industry. The main activities of the company are rig moving, assembly and disassembly, and transport of drilling rigs over both land and sea. The division carries out work all over the world under the most extreme conditions both on- and offshore. Alongside this it also 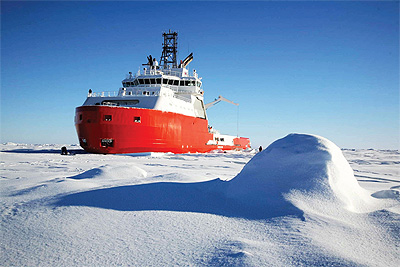 For the offshore market Foxdrill assembles new drilling rigs, called derrick packages. These rigs are assembled on land and are then lifted either in parts or as a whole onto a drilling platform or ship. This process has been used to build several of the largest drilling rigs in the world.

In Kazakhstan, Wagenborg Offshore has recently established a maritime training institute where it trains its own personnel from the local population, with local knowledge commitment and a passion for working in the burgeoning offshore market. Initially the facility will provide training for lower ranking officers, but it aims to expand its education programme in the future, for the training of chief and second mates. The future seafarers will also be trained in the English language. All training will be carried out in compliance with the high standards expected of all Wagenborg personnel. The facility will vastly increase the number of skilled local people, available to work at the Caspian Sea operations, as currently Kazakhstan has no maritime training institutes and consequently few skilled seafarers. This development will provide support for the Caspian Sea work into the future and together with Wagenborg’s continued high standards, in terms of its HSEQ accreditation, will help Wagenborg Offshore establish a strong and successful future.

Through its divisions Wagenborg Offshore has developed into a substantial service provider to the offshore and energy industries. With a forward thinking strategy that encompasses continued development, the business is sure to become a leading player in its field in the foreseeable future.