Back to Profile Gallery > Warrego Energy

Digging deep for the goods

The last time that European Oil & Gas featured Warrego Energy, the onshore gas exploration and development firm established by Duncan MacNiven and Dennis Donald, the company was in the closing stages of planning for a tight gas appraisal well in the West Erregulla Field, onshore, Western Australia (WA) with a commensurate funding round to cover the cost.

The West Erregulla concession located in the North Perth Basin has been seismically mapped and assessed to hold large volumes of gas. Warrego Energy has sole rights to Exploration Permit (EP) 469, some 230 km north of Perth. Based on work by the Energy Information Administration in 2011, block EP 469 appears to be in a sweet spot for shale gas prospectivity. Until recently the company had planned to drill an appraisal well in July 2012 scheduling production of commercial gas in late 2014.

“Unfortunately the rig initiative we’d been relying on fell over at the end of 2011,” says Duncan, outlining a sudden change in Warrego Energy’s plans. “In a matter of weeks, we had to re-order the appraisal programme so that we’d undertake 3D seismic work first, followed by the appraisal well at the end of 2013. Achieving this will take us to first gas in early 2015, when the gas shortfall really starts to bite. Obviously this meant a significant change to both the work programme and our funding activities. We’ve been able to carry the initial funders with us, continuing with both the funding round and a considerable amount of work on the ground, to enable us to deliver the 3D seismic survey on schedule. We’re confident that the balance of funding will be in place in short order and the seismic programme is on track.”

This hiccup has been anything but a detriment, however, and in fact has opened a number of unforeseen opportunities for Warrego Energy due to the rapidly rising interest in gas throughout Australia and the world. “The service sector is now catching up and by the time we come to drill there will be at least three rigs in the State – and, on current information, at least two frac spreads,” Duncan explains. “It seems evident that the service sector has recognised the scale of the opportunity constituted by WA’s evolving onshore unconventional market. In parallel with or perhaps leading this development, many large multinational players are now looking closely at unconventional opportunities across Australia. 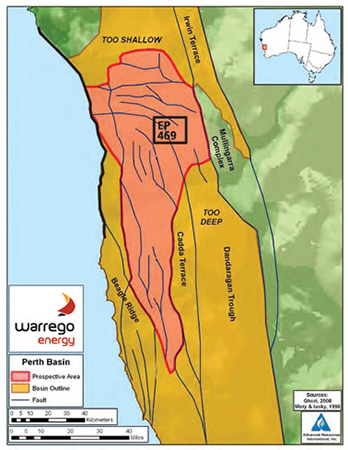 “Increases in the cost of diesel and implementation of the carbon tax mean that gas becomes a much more attractive energy choice for the major mining players and industrial users in WA. Pushing the cost of diesel into the price of raw materials in the world market has the potential to make the product uncompetitive – another compelling argument for the mining community to embrace onshore gas as the principal source of power.

“Majors such as Hess, Statoil and Conoco have seen the potential for the onshore unconventional sector and taken big land positions but speed and proximity to market are issues here. We know that others are also actively looking at positions closer to the market and closer to production.

“Looking ahead, the market for onshore gas in WA is very strong. The economic wellbeing of Western Australia is inextricably linked to the success of the mining sector. The success of the mining sector will ultimately become dependant on access to an economically and environmentally viable energy source. Onshore unconventional gas is the only meaningful solution. We therefore see very significant business opportunities for the onshore unconventional gas providers. We’ve planned our activities and positioned Warrego to deliver commercial gas to the market at the point at which the gas shortfall really starts to hurt in WA. Given the lead time on unconventional developments in the State, we don’t expect many others to be in a similar position.”

Warrego Energy continues to face challenges following the change in plans. Funding the appraisal programme in these troubled economic times has forced management to raise their game; though the company had raised half the funds needed for the appraisal programme by the end of 2011, re-ordering the programme has put pressure on both funding and operational activities. The environmental, heritage and stakeholder programmes have been squeezed due to the decision to carry out the seismic survey first. Warrego Energy is confident in both circumstances, however, that its track record, personnel and the quality of the asset and opportunity will deliver the right result within the necessary timeframes.

The company outlines two other current challenges. First is the challenge of attracting entrepreneurial personnel with the right skills-set and attitude in a very tight market. The company believes this will change once the reality of its success is evident. In a small team it’s also important to give people the opportunity to participate in the success for which they are directly responsible. Second is the lack of local service infrastructure but this, as previously outlined, is already changing in WA.

Application of cutting edge technology and innovative thinking are key to successfully unlocking the full value of the West Erregulla Field. Warrego Energy has been investing in technology to ensure that West Erregulla will deliver the best results possible. A staged stimulation system, for example, and a vibration dampening technology to increase the efficiency of drilling through hard and tight formations, will enable the company to drill, stimulate and test the well more quickly and efficiently than is conventionally the case. Meanwhile, sampling technology to read the ‘DNA’ of the well in real time, will allow considerable evaluation of both the tight sand target structure and the overlying shales. Primarily, though, the use of an innovative ballistics technology will significantly lower stimulation initiation pressure and orientate fracture propagation with prevailing basin tectonics.

The position of unconventional gas as the most environmentally friendly and efficient of hydrocarbon energy sources means demand for it is beginning to emerge across the globe. Warrego Energy recognises that this – alongside Australia’s growing economy, the scope and strength of WA’s mining industry, and the expertise it can itself bring to the region – will prove a potent combination. The company has four short term goals that keep it focused and driven: close out the appraisal funding process; undertake 3D seismic programme on time and budget; continue at pace with the drilling of West Erregulla 2 well; and manage the development programme to ensure the Field is in production by early 2015.

Duncan concludes with his strategy for the future of the West Erregulla asset and Warrego Energy in Australia: “We plan to remain at the forefront of opening the unconventional market in WA. We anticipate successful development of shale and tight gas plays in the Perth Basin and in more remote parts of WA attracting increasing numbers of service companies, infrastructure providers and capital.

“Warrego intends to leverage its technical expertise demonstrated in the successful development of EP469 to gain more acreage in the Perth Basin and beyond. Our three-year goal is to have the appraisal well successfully drilled and commercial gas in the system by 2105. Further, we are aiming to exploit the significant shale gas opportunity on our block and to be at the forefront of the shift to shale gas. There has never been a more exciting time to invest in the unconventional gas space in Western Australia.”