Wessington Cryogenics Limited is a worldwide manufacturer of cryogenic pressure vessels used for the transport and storage of cryogenic gases including oxygen, nitrogen, argon, helium, LNG and CO2.

Based in the North East of England, the family business was established in 1984 in Washington, England by Eddie Rowe, a passionate engineer and entrepreneur. Eddie’s personal career began working in heavy industry in the shipyards on the banks of the River Tyne. A broad range of successful engineering appointments followed and a passionate interest in engineering and innovation led him to engage with cryogenics at a time when the scientific research associated with it gave birth to a raft of industrial applications.

Wessington Cryogenics Limited opened for business on the 4th April 1984 in a 2500 sq ft start up unit with a two-man team. Wessington’s early focus was the manufacture of standard stainless steel dewars for the storage of nitrogen, mainly destined for bio-medical and other research laboratories. Day one of trading brought the first export order to Holland, which in turn led to other opportunities across Europe as the company’s name became well established as a market leader within the Cryogenics Industry. Several years later a high value order was won to build a large number of 1000 to 6000 litre capacity storage tanks for the Indian market, which prompted the company to expand and relocate to a 14,000 sq ft unit at Philadelphia in Houghton le Spring.

During this settling in period the company was looking to diversify and broaden it’s product range. Wessington had been asked on previous occasions if it could repair 16ft and 20ft industrial tanks for the offshore industry, and now was an opportune moment to move into this market sector. It soon became apparent that Wessington had all of the skilled personnel required to carry out such repairs and after a swift trip to Aberdeen and some negotiations, the repairs business was a welcome addition to its portfolio. It was only a small step from there to begin to manufacturing ISO tanks for the oil and gas markets worldwide. Not only did Wessington start to manufacture these but it took the opportunity to develop a 10ft offshore cryogenic tank with the same operating performance but requiring less of a footprint on the rigs and also offering economy of transport (two 10ft tanks ISO locked together to form a standard ISO 20ft footprint reduces the cost of transport from the UK to Port of Houston from approximately £6000 for single tank to £2000 for the pair). This innovation was so well received by purchasers that they are now the best selling tanks used by well service companies in every corner of the globe.

Wessington today manufacturers a comprehensive range of cryogenic storage vessels products for virtually all market sectors. The oil and gas side of the business has been so successful that it now represents around 60 per cent of the company’s annual turnover. Considering the best selling 10ft offshore cryogenic tank alone, the company has now placed several thousand 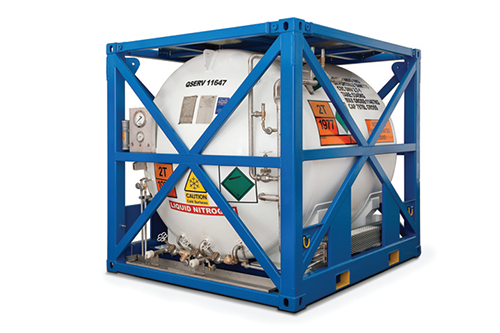 in the field over the last 20 years. It has been specified as the 10ft tank of choice by many operators for all global purchasing. Operating in the most hostile environments in the world, Wessington has exported tanks to over 80 countries, in every corner of the globe. As well as oil and gas the company serves other key industrial sectors such as defence, nuclear, bio-medical, chemistry and physics research. Its client base is impressive and includes blue chip organisations such as oil and gas giants Halliburton, Schlumberger, Baker Hughes, as well as other clients such as the Ministry of Defence, CERN, NASA, and the red brick universities including Oxford and Cambridge.

One factor that sets Wessington apart from its competitors is the depth of the engineering expertise in-house. In fact, the present directors have a combined experience of around 75 years in the Cryogenics Pressure Vessel industry, which is quite unique in comparison to the majority of its competitors. This extensive knowledge and understanding of the science of cryogenics leads to a number of requests to develop bespoke tanks, which are by nature more complex and present a potentially higher risk to less experienced manufacturers. Examples include the mobile purge units designed and developed at the request of Air Products. This is a bespoke semi-trailer with high-pressure nitrogen storage tank, diesel generator, and personnel area and steam vaporiser unit, all contained in one mobile unit that can move from site to site. This represents an economical solution for Air Products, which otherwise would have needed separate static units at each site.

Paul Rowe, managing director comments: “We were delighted to be given this opportunity to design and manufacture a bespoke product for the industrial gas sector. It has allowed us to show case Wessington’s manufacturing capabilities to a blue chip organisation, and we were delighted by the feedback received from Air Products and its associates as it took delivery of the first units.”

The company is absolutely confident in it’s manufacturing capability but chooses not to stand still or be complacent. Recently it has tackled other successful R&D projects, designing bespoke dual fuel tanks for the industrial gas market and is responding to market demand currently for large custom built helium tanks

As Paul explains: “We work hard to deliver absolute satisfaction to our international customers and it is satisfying to receive such positive feedback from our clients. We do not plan to stand still however, and recognise that new competitors will look for an easy route to enter the market and may perhaps be less interested in innovation and instead choose to duplicate the designs of existing standard cryogenic offshore tanks already out there. Projects like these keep us at the top of our game and will always be a standard for product development at Wessington.”

The success of Wessington Cryogenics Limited has not only been recognised by positive feedback from valued customers, with the company also receiving international recognition through winning a number of industry awards:

To top it all, the company recently received a royal seal of approval when one of it’s directors, Gill Southern, was decorated in the H M the Queen New Years Honours List 2011 when she was awarded an MBE for Services to North East Industry.

The continued growth of the company led to a move to a prestige 70,000 sq ft manufacturing facility at Rainton Bridge South Industrial Estate in January 2010. Business continues to thrive and the factory is now working at full capacity.

Future plans are focussed upon developing new strategic international markets, developing new opportunities for growth in bio-medical and clean fuels sectors, and of course new product development. There is no need to diversify greatly and in five years time Wessington expects to remain the manufacturer of choice for many of the oil and gas blue chip companies worldwide. With this attitude and evident commitment to excellence, there is no reason why this family company should not succeed.