Back to Profile Gallery > Wheeling and Lake Erie Railway Co. 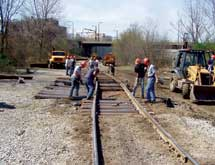 Wheeling and Lake Erie (W&LE) Railway Co. may be relatively new to the energy industry, but it certainly knows how to get material from one destination to the next. With unconventional oil plays creating a boom market in regions once considered dormant, W&LE’s freight and logistics know-how and rail coverage area make it ideal for companies operating in the Marcellus/Utica shale.

“Because the commodity base has shifted to more shale-related products, we have adapted to that changing market,” Vice President of Marketing & Sales Drew Nelson says. “Our business development efforts have been focused on attracting energy-related companies, so we also have ramped up our train and engine personnel with the incoming business.”

W&LE was founded in 1990 as a spinoff from the Norfolk Southern. The company started operations with 800 miles of track that traversed Ohio, Pennsylvania, West Virginia and Maryland and has interchanges that connects with three Class I railroads.

Today, W&LE handles approximately 100,000 carloads of freight annually for a diverse customer base. The company’s clients include the plastics, coal and steel industries, and over the last five years, producers of energy-related products like frac sand and aggregate for shale operators.

“Between aggregates and sand going in and liquids going out, quite a bit of our growth area is in energy-related businesses,” Nelson says.

Geographic Expanse
One of the many benefits customers receive when choosing W&LE is the amount of track the company can access through its three Class I connections. Through its connections with other railroads, customers can reach all of the continental United States, as well as Canada and Mexico.

“We are able to maximize our multiple Class I connections to get competitive rates for our customers,” Assistant Vice President of Business Development Jonathan Chastek says.

For example, if a customer needs to ship product west of Chicago, instead of paying to transload goods onto another carrier’s Class I railroad, W&LE can send product along its connections to the CSX, Norfolk Southern or Canadian National (CN) railroads.

This was a significant addition for W&LE because it allowed it to explore other energy markets and customers with the frac sand coming from the aggregate pits of Wisconsin. This sand is in demand because its physical properties have been deemed the best for fracking, so W&LE and other transporters are starting to deliver the sand to the Utica and Marcellus shale plays in eastern Ohio and western Pennsylvania as fast as possible. And with its three Class I connections, W&LE is one of the only companies that can deliver that sand 24/7.

“The biggest advantage we see in the shale plays and servicing customers well is our daily service seven days a week on our entire system,” Chastek says. “A lot of our competitors have scheduled service, so if they shut down a well, it is costing companies hundreds of thousands of dollars.

“One reason we’re so successful is, if a customer says, ‘Hey, we really have to shut down if we don’t have product in the next 12 hours,’ a lot of times we can make it happen in a timely manner,” Chastek adds.

Energy for the Future
As long as the commodities remain in demand across North America and related products are needed to extract them, W&LE has a bright future ahead of it in the energy sector.

“As far as the near term, we’re excited because of shale opportunities,” Nelson says. “We do feel that [with] infrastructure commodities for shale plays like stone and frac sand [that] there is a five- to seven-year window where we should see some significant and sustained growth, particularly in Ohio.”