Since the beginning of the last century Emlichheim’s history has been closely connected with crude oil production.

In particular, following the discovery of the Emlichheim crude oil reservoir in 1943, the region has been in production under Wintershall, a company with over 80 years of activity in the exploration and production of oil and gas. Wintershall is a wholly owned subsidiary of BASF, which is based in Ludwigshafen and specialises in energy.

Whilst the proportion of crude oil produced in Germany is relatively low compared to the region’s overall consumption, Wintershall is continuing to invest in domestic oil production through its Emlichheim facility, and as such is one of the country’s largest oil and gas producers. In 2005, 60 years after production in Emlichheim commenced, Wintershall crossed the production threshold of nine million tonnes of crude oil. At the beginning of the current decade the facility was reorganised in line with a new focus on the ‘In den Emlichheimer Weusten’ field, in the Grafschaft Bentheim.

“Our focus over the last 12 months, and equally our focus for the coming 12 months, is a new well drilling campaign, along with works to pursue areas of potential within the field through steam flooding technology,” explains Dr Volker Riha, field manager at the Emlichheim facility. “At present we are nearing the end of phase one of this campaign, having drilled 11 wells out of a prospective 16. These are expected to be completed by September 2011.”

The first two horizontal wells were completed last year, paving the way for further drilling activities. With this success behind it, the facility was able to implement best practice and other ways of working learnt during this time to reduce the drilling period for the rest of the campaign to approximately 20 days per well. “Phase one has been very successful, as not only are we producing more oil than expected, but also this production began earlier than anticipated,” describes Volker. “Once phase one is complete, we will look to begin implementing phase two immediately, in order to retain the teams and ways of working we have developed through the first part of this campaign. In this second phase, we are planning to drill an additional 13 extended reach wells over the next year, which will help extend our production plateau for a further eight to ten years.” 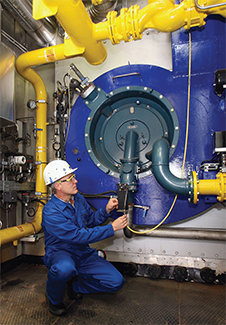 One of the key factors behind the success of the Emlichheim facility is the technical knowledge it is able to implement into every operation. As a company Wintershall is focused on looking at new technologies, and for Emlichheim this involves investigating ways these can be utilised in the field. One example was the early application of horizontal well drilling – a technique used elsewhere by Wintershall – to Emlichheim ten years ago. The overwhelming success of this method is clear as the majority of new wells drilled by the facility are now horizontal, which has helped to increase its well yield. Together with Wintershall, the Emlichheim facility is looking at other new technologies and enhanced oil recovery (EOR) methods that can equally help increase its recovery factor and maintain production for years to come.

Perhaps the most widely recognised innovative production technique used at Emlichheim is steam flooding technology. Having first been applied at the facility by Wintershall in 1981, this technology has undergone continuous development since this time, largely with the introduction of automation. Volker elaborates on this evolution: “Prior to steam flooding technology, in the late 1960s and early 70s we were using hot water as a method of EOR. This continued even into the early 2000’s, due to the fact that some of the wells were unable to withstand the high temperatures of steam injection. Now with better technology and more steam being readily available we are able to convert those areas to steam flooding.”

The process itself utilises steam with a temperature of approximately 300 °C and forces it into an oil deposit at a pressure of around 100 bars. As the crude oil within the rock warms up, it becomes less viscous and is therefore easier to pump to the surface. As a result, technology such as steam flooding can significantly extend the life of older oil fields, and in countries such as Germany with difficult geological conditions can also aid the development of wells.

Furthermore, the expertise that Wintershall acquires in Germany through the Emlichheim facility serves to enhance its overall technical competence, and can be applied in other international projects. In this respect, the Emlichheim facility is continuing to widen its scope by bringing production support activities in-house: “Like many production companies we have facilities in place to separate the oil and water produced from our fields,” remarks Volker.

“However, we are then able to regenerate that waste water into boiler feed water for use in our steam flooding activities. In this respect we have taken a mechanical vapour compression unit, which is readily available on the market, and applied it to our requirements. This enables us to remove the salt and mineral content from our waste water to produce purified boiler feed water, which can then be turned into steam and injected back into the field. As such, we are able to completely recycle these raw materials, as opposed to remaining dependant on other fields like our competitors.”

As Volker concludes, having operated in the market for in excess of 60 years, the emergence of ever more sophisticated EOR techniques suggests there is still plenty of life in Emlichheim: “Over the next few years we are looking to undertake a lot more remedial operations such as sidetrack drilling using our own equipment, which is also a key part of our current drilling campaign. Following the completion of phase one and two of this programme, we will have fully redeveloped the Emlichheim field in the Grafschaft Bentheim, and subsequently will be looking to follow up on those activities. This will enable us to meet our target of maintaining our production plateau for the next few years, and ultimately secure the future of our site.