Back to Profile Gallery > Worthington Industries 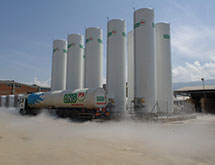 Worthington Industries has never been afraid of new opportunities. Business Manager Jeff Holyoak says the company has been on the forefront of developing pressure cylinders for the compressed natural gas (CNG) and other alternative fuel markets for many years, so it was only natural that the company would take advantage of the rising popularity of liquid natural gas (LNG). “We’ve been in the energy and alternative fuel storage markets for quite some time, and a missing component of offering a complete clean fuel storage portfolio was an LNG offering,” Holyoak says.

With the help of a new acquisition and the construction of some new, state-of-the-art facilities, Worthington Industries has made inroads into the LNG sector. Holyoak says the company’s goal is to expand its footprint within the LNG industry in the United States as well as further expand in Europe and Asia. Even though the onboard and high horse power (HHP) LNG market is relatively young, with numerous manufacturers all jockeying for position to show what they are capable of, Holyoak says Worthington Industries is putting the pieces in place to carry over the solid reputation it has earned serving other areas of the industrial gas, oil and gas and alternative energy sectors into this new venture. With the numerous advantages LNG provides as an alternative to diesel fuel in HHP applications and power generation, companies that can effectively service a customer’s LNG needs stand to reap significant rewards, and Holyoak says Worthington Industries is ready.

Built For Success
Based in Columbus, Ohio, Worthington Industries has been in business since 1955, when it was created to produce custom processed flat-rolled steel. Today, Worthington Industries is a publicly traded company (NYSE:WOR) with $3 billion in annual revenue. The company is the largest independent processor of flat-rolled steel in the nation, processing steel that is used to manufacture everything from office furniture and appliances to tractors and automobiles.

Pressure and atmospheric cylinders make up another substantial portion of the company’s business where Worthington Industries provides cylinders used for gas barbecue grills, CNG-fueled vehicles and refrigerants, among other applications. Worthington’s core competency of tank manufacturing for highly technical, regulated markets extends to serve the Oil & Gas and nuclear industries, providing custom solutions for energy storage, production and transport. The company has shipped product to more than 70 countries and has manufacturing facilities in the United States, Austria, Portugal, Poland and Turkey. This global footprint makes Worthington Industries the world’s leading supplier of pressure cylinders.

Continued Expansion and Acquisition
Worthington Industries made its entrance into the bulk LNG sector through key strategic acquisitions, Holyoak says. Two-and-a-half years ago, the company began developing its own line of liquid cylinders aimed at serving the cryogenic and LNG markets. To bolster its position in that market, the company acquired Turkish cryogenic manufacturer Aritas, a leading producer of large cryogenic vessels used for storing and transporting LNG. The company has over 35 years cryogenic experience with a significant knowledge base in marine fueling and HHP applications as well as major brand recognition in Europe and Asia.

“Aritas has been instrumental in building the LNG mobile pipeline and onboard fueling markets throughout Europe for over a decade,” Holyoak says. This acquisition, combined with its recent acquisition of U.S.-based James Russell Engineering, a high quality provider of cryogenic and LNG transport trailers, positions Worthington to service the global LNG marketplace. “We are a global leader in on-board marine fuel systems for fueling cargo ships, ferries, and tugs and have been actively utilizing this expertise to develop products for mine site fueling, both on-board for mine haul trucks and on-site for gensets. With more than 25,000 large haul trucks in service the opportunity to generate substantial fuel savings and Tier 4 compliance on site is driving innovation in this space and Worthington continues to invest in that development.

Through these acquisitions and internal development, Worthington Industries has built a strong foundation for its LNG offerings, but the company hasn’t stopped there. Worthington Industries is upping the ante by building and planning new, state-of-the-art cryogenics facilities in Europe and the U.S. to meet the growing needs of North American LNG fueling and distribution markets.

Worthington Industries will augment those enhanced manufacturing capabilities with the company’s well-known ability to provide full solutions for its customers. Holyoak says that when customers come to Worthington Industries for their natural gas needs, they receive more than just the product. They also receive the engineering know-how to ensure that those products integrate seamlessly into their existing operations, meet all the rigorous environmental and safety standards, and give them nothing to worry about. “When someone purchases from us, they don’t just buy a tank, they buy a complete system solution,” Holyoak says. “That’s really what we bring to the table.”

’Bringing Solutions’
The biggest complication in the company’s foray into LNG is that, compared to other alternative fuels, the infrastructure and supply chain for LNG are less established. CNG remains the alternative fuel of choice for many for the simple fact that there are far more fueling stations and infrastructure in place which has limited adoption in higher volume applications like high horsepower and power generation.

Holyoak adds that the regulations in place regarding the use and distribution of LNG have not yet caught up with the technology, as the regulation becomes more stable greater investment in infrastructure will follow. LNG has been proven to be a lower cost, cleaner burning alternative than diesel for large-scale equipment such as mine trucks, marine fueling, and drilling or frac rigs, so as companies begin to understand the benefits of LNG as well as the long term price stability of the fuel, adoption will increase dramatically.

Fortunately, there is a lot of room for growth in the LNG market, and Holyoak says Worthington Industries expects continued investment in supply chain infrastructure and applications globally. “With the exception of long-haul over-the-road trucks, I don’t think we’ve even hit the tipping point in many of these markets,” he says. “Marine fueling is becoming more the norm in Europe and there is strong interest and early infrastructure investment beginning in North America. Mine truck fueling, rail tender fueling, E&P power generation are all at the early adoption stages. Mobile Pipeline infrastructure and power generation is continuing to expand in scale and scope daily.”

Worthington Industries expects a lot to happen in the LNG market over the next 12-24 months. Many of the major players in the mining, marine and energy sectors already are familiar with the company’s oil and gas equipment, industrial and alternative fuel products, and Worthington Industries looks forward to serving them in the LNG arena, as well. “This is our launch party to the LNG world,” Holyoak says.