Established in 2003, Xcite Energy Limited, through its wholly owned subsidiary Xcite Energy Resources Limited (XER), is an oil exploration and development company based in Banchory, Scotland.

Focused on the heavy oil resources located in the North Sea UK Continental Shelf, the company’s task remains the evaluation and development of indentified heavy oil discoveries within the Bentley field in Block 9/3b in the UK North Sea.

In January 2008, XER successfully operated the drilling and testing of the 9/3b-5 well, achieving the primary objectives of sampling the Bentley oil by way of a drill stem test and confirming the excellent reservoir characteristics and continuity of the reservoir. It was the first oil to flow from the field and through modelling and analogy to the nearby Bressay field enabled a prediction that commercial flowrates were achievable.

At the end of 2010 XER drilled, completed and flow-tested the 9/3b-6 well and horizontal sidetrack 9/3b-6Z. This well confirmed Xcite’s prediction of commercial flowrates by achieving a stabilised flow of 2900 bpd during a multi-rate test. A large four-way dip-closed structure, approximately 15km by 6km, the Bentley field is established by six appraisal wells including the sidetrack and delineated with reprocessed 3D seismic. The crude within the field has been assessed by an independent marketing specialist and has been shown to contain many valuable attributes including a large VGO cut, low sulphur levels and low metals content: “What the company is doing today is moving very rapidly towards the first stage of production, raising the required level of finance to complete this task,” explains Charles Lucas-Clements, director of business development for Xcite Energy Limited. “The company is looking to develop the field in various phases with production starting in 2012 before moving into the second phase shortly thereafter.”

AGR TRACS has just assigned Reserves to the Bentley field at a 2P level of 28 million barrels of oil. This underwrites the viability of the first stage production. Additionally, contingent resources and prospective resources were also assessed. The field has considerable up-sides through the presence of potential up-side structures and the application of enhanced oil recovery techniques. Further analysis of how these techniques can be used in the Bentley field is a key part of XER’s ongoing work programme and it has shown to deliver particular benefits to heavy oil fields in both onshore and offshore settings. 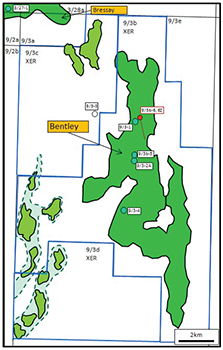 In February 2011, Xcite Energy Limited announced that XER had entered a binding drilling contract with British American Offshore Limited for the N-Class ‘Rowan Norway’ deepwater jack-up unit, designed and built for simultaneous drilling and production in harsh environments. This will be used for the first stage of production.

“Xcite Energy Limited possesses a highly technical team who all come with more than 20 years of experience within the oil industry,” Charles says, highlighting one of the company’s key strengths. “This means the company is able to extensively cover all the key elements of exploration and development. It is this that makes it much more akin to an appraisal development company than just an exploration organisation, which is a very important distinction that sets it apart from the competition.”

Barny Brennan, director of subsurface operations for Xcite Energy Limited is also keen to point out the technical achievements of the company: “The Bentley field is a viscous heavy oil field, the type that is generally considered very challenging and, to a certain extent, unpredictable. One of the things the company has done very successfully is focus on how to get these heavy oil fields to work effectively. Utilising the technical expertise at its disposal, the company is able overcome the uncertainties that traditionally arise from these types of field and in-turn predict good commercial flow rates with a high degree of confidence.”

While the financial issues of the last several years did delay the company’s original plans, Xcite Energy Limited has benefited from maintaining a prudent, conservative approach to spending and costs at a time when investment levels globally took a downward turn: “Today the company is in a position to progress at a healthy, steady pace, something that is very exciting indeed,” Charles continues.

“Since its foundation Xcite Energy Limited has strived to become one of the leading heavy oil experts in the North Sea and thanks to the work it has already carried out and the successful flow test that was completed at the end of 2010 it is safe to say it has been really successful in becoming just that,” Barny concludes.