Back to Profile Gallery > Yokogawa

Founded almost a century ago in 1915, Yokogawa is a global corporation headquartered in Tokyo, Japan.

The group’s main activities span the sectors of industrial automation and control equipment, test and measurement instrumentation, as well as complementary services that meet the needs of customers located around the globe. The organisation’s worldwide presence includes offices in North and South America, Africa, Europe, China, South-East Asia and the Middle East. The oil and gas sector of the industrial automation division of the group has a focus on the North Sea offshore business as a target market, providing solutions for both green and brown field automation projects.

With decades of experience and knowledge to its name, Yokogawa enjoys lucrative activities in numerous markets. The organisation has interests in all kinds of process industry applications from the chemical and petrochemical industries to the power sectors and oil and gas market. The latter of which is managed from the European office in Amersfoort, the Netherlands where the company manages its centre of excellence for oil and gas. 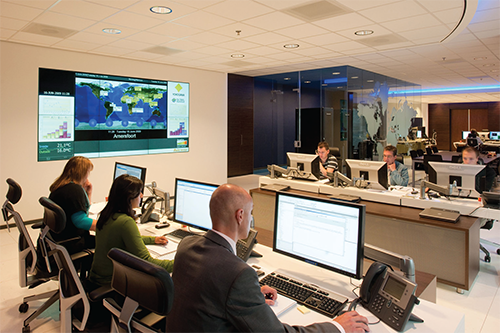 John Van Der Geer, manager of the centre of excellence, explains: “Our main activities and responsibilities are to manage large oil and gas projects that are taking place throughout Europe and Africa. We provide our expertise to support the sales and project offices throughout the region to execute projects in a standard and high quality way.”

The organisation aims to share the expertise it has gained over the years of successfully delivering contracts, and its offices are in situ to support customers on a local level. It is important to clients that they are able to deal with local people, who know the local conditions and speak their own language, and Yokogawa appreciates this. “Our combined strengths in the fields of oil and gas, as well as LNG set us apart from the competition, while the fact that we are able to handle both greenfield and brownfield projects makes us popular with major clients. We are also able to take on the Main Automation Contractor role as and when our customers require, and we have carried out numerous contracts with the likes of Shell, Chevron, Total and BP,” John adds.

Attendance at the ONS exhibition this year, held in Stavanger Norway in August was vital for the company’s strategy to increase visibility in the Norwegian markets. Having first penetrated this region in 2007, Yokogawa is gradually increasing its interest and expanding its customer base. The organisation gained a great deal of interest from oil and gas companies, not only as a company name, but as a technology provider for its wireless solution as well. The unique field of wireless network is a network of wirelessly linked sensors that are typically installed in production facilities either temporarily or on a permanent basis for the easy transfer of information. Based on the ISA100.11a Industrial Communications Standard, the wireless field devices adhere to global standards and have been designed together with pioneering end-user’s engineers. Not only does this offer customers value for money when it comes to measurement instrumentation, but its efficiency also means that extra devices can be installed anywhere that information is required, providing operators and maintenance engineers with swift and easy communication.

As one of the market leaders in the field automation arena and the delivery of turnkey projects, Yokogawa is consistently involved in some of the most important industry developments. Most notably, the organisation was awarded the position of main automation contractor (MAC) on the Bruce Turnaround (TAR) offshore platform – one of the largest of its kind on the UK continental shelf. Located in the northern North Sea, this facility is capable of processing 620 mmscf/d (million standard cubic feet per day) of gas and 80 mbd (million barrel per day) of oil, with current production rates of 500 mmscf/d. Selected by BP as the MAC for the controls improvement project (CIP), Yokogawa was tasked with the deliverance of a best-in-class integrated control and safety system to replace and improve the reliability of the existing ABB DCS and ICS safety systems. A unified approach led to the success of the project, which was completed in late 2009, with the team of BP, WGE and Yokogawa achieving completion on schedule and the subsequent re-introduction of hydrocarbons onto the facility.

Looking to the future, John has ambitions for further expansion and establishment in  Yokogawa’s chosen markets: “We expect to increase our market position in the North Sea as a result of recent brown- and green field awards and the high number of upcoming opportunities. We also predict that international activities will increase with expansion in floating production installations and increased activity in Africa being key elements of our strategy moving forward.”