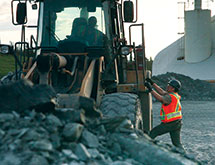 When the company now known as Yukon Zinc Corp. was purchased by Chinese firm Jinduicheng Molybdenum Group in 2008, its primary asset was the Wolverine Mine in southeast Yukon. Recognizing the strong potential of the high-grade zinc/silver/copper/lead/gold mine, Yukon Zinc fast-tracked the mine into production.

Vice President of Operations and Mine General Manager Floyd Varley says that move turned out to be the right one for the company. He says the high-grade zinc and silver deposits in the mine have put Yukon Zinc in a good position to succeed once zinc prices rebound. In the meantime, the company is putting the ingenuity and skill of its employees to good use by improving the operation’s efficiency and environmental impact.

Yukon Zinc began as a junior exploration company known as Expatriate Resources about 20 years ago. After some time as a publicly traded firm, Yukon Zinc was taken private again after its 2008 acquisition by its current parent company.

Strong Asset
The main focus of Yukon Zinc’s efforts today is the Wolverine Mine, located approximately 282 kilometers northeast of the territory’s capital of Whitehorse. The volcanogenic massive sulphide deposit was discovered in 1995, and features two semi-continuous lenses of mineralization ranging from 6 to 25 meters in true thickness. Yukon Zinc held other properties at the time of its acquisition, but Varley explains that these were not explored as thoroughly as the Wolverine Mine had been.

Yukon Zinc began construction at the Wolverine Mine in 2009, with operations commencing in 2011. By early 2012, commercial production (1,200 tonnes per day) was achieved at the mine, and full design capacity (1,700 tonnes per day) was achieved in the first quarter of 2013. According to Varley, now an average of 1,350 metric tonnes (approximately 75 percent of designed capacity) of minerals are mined from the Wolverine Mine every day.

Varley adds that the success of the Wolverine Mine so far has been thanks in no small part to the high degree of expertise and experience Yukon Zinc’s employees have brought to the site. “I think our best assets are our people,” he says. “We have a pretty resilient team that has had to deal with a lot of adverse conditions in a lot of poor ground and a remote location without a great infrastructure behind us for supply chain.”

Lean Operation
That foundation of experience has helped Yukon Zinc and the Wolverine Mine thrive even during some very difficult times. Varley says the most significant challenge faced by the company today is the prices of zinc and silver, which dropped in 2013 due to a surplus on the market and has remained at low levels through the beginning of this year. “It’s caused us to change our approach to try to conserve capital, and we run a fairly lean operation, manpower-wise,” Varley says.

The company’s primary focus at the moment is keeping the Wolverine Mine in production so that it can capitalize on the price of zinc when it could rebound. To achieve this, Varley says the mine has been placed on a schedule that includes a week each month when the mine goes idle to conserve power. By running at about 75 percent of its full capacity, the Wolverine Mine has been able to remain in production without exceeding its revenues. “That plan allows us to run at the same cost as if we were running full production,” Varley says, adding that through other continuous improvement efforts, Yukon Zinc was able to reduce its operating costs last year by nearly 40 percent.

Eco-Friendly and Social Focus
The company’s continuous improvement efforts also have contributed to Yukon Zinc’s exemplary environmental stewardship and social responsibility record. In two of the last three years, the company has been honored with the Robert E. Leckie Award by the Yukon Government for its environmental and social commitments, which include socio-economic opportunities for local Yukon communities and the Kaska First Nation.

Varley says the Wolverine Mine site is self-contained, with zero discharge into the surrounding environment and a very small footprint in the wilderness. Yukon Zinc has taken additional steps to reduce that impact even further, including utilizing waste heat from generators to provide heat to workers’ areas. Varley says the company also is looking into the use of liquid natural gas for power generation to reduce emissions and save money.

Thanks to the resourcefulness of its employees and the resources available in its Wolverine Mine site, Varley says Yukon Zinc stands to benefit a great deal once the price of zinc rebounds.