Back to Profile Gallery > Zargon Oil and Gas Ltd. 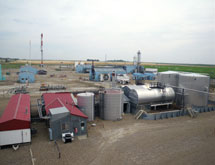 Some people throw out the mayonnaise jar when they can’t scoop any more out of it. Other people will take a knife and painstakingly scrape the jar’s sides and get enough mayonnaise for at least another sandwich, maybe more. But they need time and different tools to do the job.

That, basically, is what Zargon Oil and Gas Ltd. is doing with oil wells. Once a big company has obtained as much oil out of a well using conventional methods as it can – which may be only 15 percent of the total oil in the well – it moves on to the next gusher. But Zargon is betting that at least another 12 percent of the oil in that well can be obtained using enhanced oil recovery (EOR) methods.

“During its lifetime, an oil well will go through a number of depletion processes,” explains Rob Moriyama, vice president of enhanced recovery. “Initially in our area, natural reservoir pressure drives oil to a producing well. Before that pressure becomes depleted, water injectors are installed to displace the oil to the production wells.”

When water injection no longer yields economic oil rates, most companies abandon the well, but before this happens, Zargon plans to inject water with a detergent to flush out the oil that was left behind, in what is known in the business as an Alkaline-Surfactant-Polymer flood, or ASP. “We’ll be injecting chemicals in a very diluted state into the reservoir and cleansing the reservoir to recover additional oil,” President and CEO Craig Hansen states. “This is all about improved recovery methods.

“The oil in place is well-defined,” Hansen adds. “We recover 40 to 50 percent of the oil from the existing processes, and we’re anticipating the recovery of an additional 12 percent using ASP.”

ASP flooding cannot be applied to all oil reservoirs, and so engineering studies are performed to screen potential candidates. Once a target is identified, the specific chemical combination requires laboratory screening. “We have done a lot of lab work to determine the right formulation of chemicals to be injecting,” Moriyama points out. “That is a key component of a successful project.

“The industry in general has been evolving this technology in Canada since the mid-1980s,” Moriyama adds. “Although a lot of industry research has been going on, specific studies must still be conducted for each individual reservoir.”

Formulation and Facilities
Some of the latest developments are in chemical formulation and facilities. “There’s been a lot of research and development work to produce better surfactants (detergents) tailor-made to the kinds of oil we’re trying to recover,” Moriyama says. “On the facility side, we share technology with oil sands development in areas of water reuse, de-oiling technology – getting oil out of the water – and softening the produced water for re-injection.”

The development of more robust surfactants and water-thickening polymers by Zargon’s suppliers yields increased oil recovery and reduced chemical concentrations (and costs) which improves returns on investment over similar recovery attempts up to 30 years ago that were less successful, Hansen adds.

Understanding the underground reservoirs is crucial to successful recovery. “So our strength is not about doing giant projects,” Hansen declares. “Our specialty is understanding flow in reservoirs. One of the major issues of these projects is making sure that you’ve got the right reservoir and that you understand it. As a result, when you inject this chemical, you are contacting as much of the remaining oil as possible and producing it in an efficient and timely manner.”

Just getting all the resources organized consumes much of the project’s capital. “We need $100 million to do this, and almost half is spent on chemicals,” Hansen notes. “The other half is spent constructing water re-use and chemical injection facilities, upgrading existing oil processing facilities and ensuring proper placement of injection and production wells. So that’s a big part of it.”

“We didn’t see our chances as very good to buy an asset from an oil company many times bigger than us,” Hansen adds. “They would want to do this themselves. So we bought assets in numerous stages and built up the project through multiple purchases.

“Looking ahead, there’s maybe 100 million barrels of oil recovery potential in southern Alberta using this technology,” Hansen calculates. “While that’s small compared to the oil sands or multi-stage frac resource plays, it still represents a significant recovery target for a company our size.”

For the immediate future, Hansen wants to concentrate on Zargon’s existing project portfolio. The company’s plans are centered on seven projects, six conventional oil recovery projects and the Little Bow ASP project. “Right now, we have a very defined set of projects to work on,” Hansen says. “Execution of these projects will give us the opportunity to be bigger. We first have to show people that they work and gain confidence, and then there’s room for growth. Our conventional projects are very straightforward. We need to do what we’re doing and execute. We’re always in a niche market, but we can do more of it.”

As for ASP, Hansen notes that Zargon is one of the few companies that is pursuing this method of enhanced oil recovery in Canada. “This is not well-known technology outside of the oil and gas business, but the number of commercial projects has been and will continue to grow,” he says.

Moriyama has been attending conferences of the Society of Petroleum Engineers for many years. “The trend has really been that chemical flooding with polymers and surfactants is occupying more and more of the discussion space at these conferences.”

“What we’re saying is that these projects are attractive, and they’re going to be done by the people that can best evaluate and execute them,” Hansen concludes, “We believe we are in that group.” EMI