By working closely with its clients from the early stages of their respective projects, offshore marine contractor Scaldis has come to be recognised as a leading international specialist in marine heavy lifting, transportation and installation works. Utilising its multipurpose heavy lift vessels, Rambiz and Gulliver, the company is today active in five core markets – civil construction works, 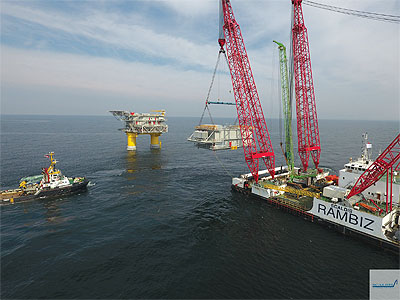 “In the recent years, Scaldis has gained a great deal of new experiences when it comes to its core business,” begins General Manager, Frank Elskens. “During that time, we have seen a growing trend when it comes to the European decommissioning market, stable workflows in the renewables sector and ad-hoc demand for civil related marine heavy lifting work. The most important recent highlight for the business has been the introduction of our second heavy lift vessel, Gulliver in 2018.”

The new build Gulliver has been ordered with one eye on securing and expanding the company’s services, including the installation of offshore infrastructure and decommissioning in deep water for the oil and gas industry, and the installation of offshore wind farms, with focus on the substations and jacket foundations. “Gulliver possesses all of the key assets of our other heavy lift vessel, Rambiz, such as a unique two crane arrangement that allows each to work independently or be synchronised, shallow draft, large deckspace and modern accommodation facilities, but has several exciting features that help to increase the competitiveness and capabilities of the new ship,” Frank details. “These include upgraded workability, increased lifting capacity, height and deck space, a fully self-propelled DP2 vessel, skidding cranes and a helideck. Going forward, Gulliver will be our flagship focusing on the waters of Western Europe, with Rambiz complementing its needs and exploring other regions.”

In the last two years alone, the company has been responsible for completing a number of major projects, including many for major blue-chip, multinational clients. In 2017, for example, Scaldis was tasked with installing the unmanned gas platform L13-FI for NAM in the Dutch sector of the North Sea, which was the first monotower installation to be completed without the use of a gripper frame or installation template. The lifting, upending, positioning and driving of the monopile foundation was carried out using a combined Vibro Lifting Tool, with the verticality of the monopile being installed well within tolerance. Upon completion of these works, Scaldis also carried out the installation of the column and topside.

A particular achievement of note for the company that same year was the successfuldecommissioning/removal of the offshore Horne & Wren platform in the southern North Sea. Upon arrival at the site of the platform it took just three days for the complete structure to be decommissioned, including the completion of an in- and out-seabed survey, and the cutting, lifting and seafastening of the topside onto Rambiz. From there, the piles of the jacket were dredged and cut to the target depth, whereupon the ILT’s were installed and the jacket lifted, and Rambiz returned with the topside stowed on deck.

Other projects completed around the same time included the decommissioning of three offshore gas platforms for Perenco, and the installation of the first bolted substation for the Nordergründe 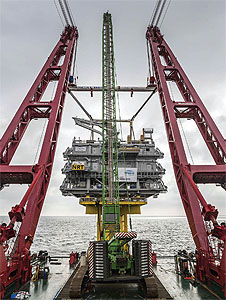 offshore wind farm for WPD. Weighing more than 2000 tonnes, the topside was lifted and installed onto a monopile foundation flange. The subsequent alignment of the two flanges posed a particular challenge, with close co-operation between the respective engineering departments of Scaldis and WPD proving to be essential to the success of the project.

Further examples of Scaldis’ expertise being put to good use have continued throughout 2018, with projects on the Kriegers Flak offshore wind farm in the Baltic Sea and on Belgium’s Norther wind farm. In the case of Kriegers Flak, Scaldisinstalled two gravity based substation foundations, weighing 10,000 tonnes and 14,000 tonnes individually. The company was involved in a unique installation method to safely install the foundations,by combining the capabilities of a semisubmersible barge, the floating capacity of the foundations themselves and itsown heavy lift vessel, Rambiz. Almost two months after the completion of this project, the company installed two offshore substations on these foundations for Energinet DK.

Reliable partner
More recently, in August 2018 to be exact, Scaldis marked an important milestone, when Gulliver was successfully used to install its first substation at the Norther wind farm. The company was awarded a contract from ENGIE Fabricom for the installation of the project’s four-deck offshore high voltage station. Once on site, the topside structure of the station was lifted from its transportation barge’s seafastening grillages by Gulliver. From there it was expertly lifted above the monopile foundation, positioned and lowered safely onto the transition piece.

“As you can see in the many different projects we have completed, Scaldis has earned a reputation for being a solid and reliable partner to its clients, with our in-house specialists and well-established supply chain creating an excellent track record in delivering complex projects in a safe, efficient and timely manner,” Frank adds. “Moving forward, we expect turnover to grow with the company now operating two multipurpose heavy lift vessels, while at the same time we will continue to innovate through R&D programmes that will deliver further improvements in the areas of HSES, operational excellence and client satisfaction.”