Back to Profile Gallery > E-Tech Group

Although E-Tech Group as it stands today started life in 1994, the company name itself was first introduced ten years later in 2004.

The brainchild of Gary Williams, Paul Brown, Adrian Dawes, Derek Rose and Alan Gordon – who between them have a multitude of experience in the oil and gas, and commercial marine industries – E-Tech Group was created to offer a comprehensive ‘total solution’ electrical engineering service to these sectors. Initially consisting of two companies, BCD Cables and Peto Services, a rapid combination of mergers, acquisitions and organic growth saw a number of other companies added to the E-Tech Group portfolio. At this point the business took the decision to bring all of these different aspects under a single name and identity – E-Tech Group.

Having continued to grow on an international basis with 11 sites in the UK, three bases in mainland Europe, and one facility in Dubai, in 2007 E-Tech Group turned its attention to Ghana in West Africa, following major developments within the country such as the Jubilee Field. “At the time not many people were aware of the developments taking place in Ghana,” notes E-Tech Group co-founder anddirector Gary Williams. “One of the partners Alan Gordon, and a colleague Abbey McDonald were invited to visit Ghana and look at some of the potential opportunities within the region. In fact, such was the prospected scope of growth within the oil and gas sector in Ghana that they actually registered a company, ETG Ghana, on our behalf immediately, which is something we have never done before.” 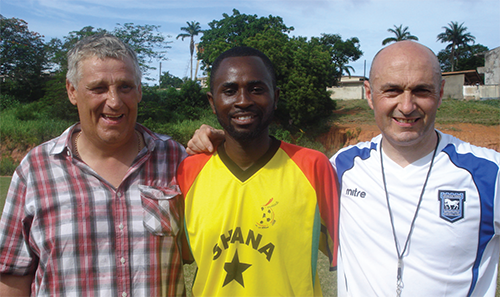 When you consider the levels of activity within Ghana just a few years later, in hindsight this was a very shrewd move. Initially E-Tech Group concentrated on promoting its supplies division and logistic support services, with the intention to bring in the engineering aspect of the business as requirements grew through the development of the region. “From that initial visit we were one of the first companies formally registered as a Ghanaian trading company. We are fully supported by the Ghanaian National Petroleum Corporation (GNPC) and have worked alongside the Ghanaian Ministry of Energy and UK Trade and Investment (UKTI). E-Tech Group is already involved in projects across Africa, and we have found that a lot of these countries are looking to Ghana as a safe hub into West Africa, making it an ideal area to establish central operations,” highlights Gary.

Beyond the obvious business opportunities within Ghana, E-Tech Group is one of many companies investing in the local Ghanaian community, in line with the GNPC’s vision for every individual to benefit for the country’s new wealth. For E-Tech Group this is being achieved through sport. Having watched children playing in a local village football match without any equipment or football strip, passionate sports fans Alan and Abbey put out an appeal through the Scottish Football Association and amateur clubs asking if they would donate any spare football kit. This was met with overwhelming support as 100 full sets of kit were donated and subsequently shipped out to Ghana. “From there, in summer 2010 Alan and Abbey organised a local football tournament between 30 to 40 Ghanaian clubs, and through Alan’s contacts at Ipswich Football Club, one of the club coaches also flew out with them. This was a great success, and the value to the local community has been enormous,” explains Gary. E-Tech Group is looking to repeat this success this summer, as well as to establish a training academy in the future.

Although E-Tech Group’s core business is firmly routed in oil and gas, and commercial marine markets, given industry conditions in recent years, the company has looked to diversify its strategy into other areas such as the water utility industry. As a result, earlier this year, E-Tech Group secured a £18 million three-year maintenance and supply solution contract with Thames Water, servicing approximately 3000 sites around London. “Our movement into the water utility sector has resulted in a very healthy order book for the next two years – a position that six months ago we weren’t necessarily expecting,” describes Gary. “We are also moving significantly within the offshore wind sector, focusing on the marine support side of the industry such as construction and crew transfer vessels.”

Regardless of industry, E-Tech Group’s clients are all recognising the benefits of the company’s one-stop-shop service provision for electrical and instrumentation requirements. With everything from concept to commissioning in-house, E-Tech Group offers an unparalleled service backed by expertise, from a single point of contact. In terms of continuing to drive this concept forwards, Gary concludes with his ambitions for E-Tech Group: “We are continuing to look at global opportunities and diversifying into other industries which have a synergy with our core markets. Our engineering team have extremely high skill levels working in complex and challenging environments, and it is in these markets that we are competitive. Having been on the market for 17 years we have become a recognised player and I am confident about the continued growth and reputation of the E-Tech Group identity.”