Back to Profile Gallery > Preem

With a turnover of £11.1 billion, a refining capacity of more than 18 million cubic metres of crude oil every year at its two ultra-modern refineries, a lubricant factory (J/V), six operational depots and approximately 600 gas stations, Preem AB holds the crown as the largest oil company in Sweden.

On top of this, the company is the biggest supplier of MK-1 diesel in the Swedish market; the diesel is a typical ‘city diesel’ with a sulphur content of less than five parts per million (ppm) and very low particles content in the emissions, vastly lower than the maximum 50 ppm quality that has been required in Europe since 2005.

Focused on supplying the Swedish market with environmentally adapted, effective oil products, Preem AB’s two refineries, located in Lysekil and Gothenburg, are managed and optimised as one system, with common management, strategy, development and future plans. As a result of continuous investment, the two refineries are today among the most modern and environmentally friendly in Europe and the world; furthermore, they have been certified in accordance with ISO 14001, which represents the core set of standards utilised by companies for the design and implementation of an effective environmental management system. Recent investments, in line with new EU regulations, include the refinery in Lysekil being extended with the most up-to-date technology for the production of wholly sulphur-free vehicle fuels; the facility became operational in 2006 and makes it possible for more fuel-efficient engines to be built in the future. Current plans are underway to construct an additional facility in Lysekil, which will have the capabilities to separate the heaviest fractions of crude oil from both refineries and refine them to create diesel, gasoline and LPG.

Headquartered in Stockholm, Preem AB buys and supplies its two refineries with crude oil, before marketing and selling all products. Its strategy is to operate its refinery system at maximum capacity; approximately 18 million cubic metres per year, while also focusing production on environmentally classed products based on renewable tall oil from the Swedish forests. Qualities produced include gas oil, gasoline, diesel oils, aviation fuel and heating oils for supply customers and companies in Sweden. It is also one of the country’s major exporting firms, with more than 67 per cent of production exported primarily to northwestern Europe. To ensure high quality, all production is monitored and controlled from Preem AB’s central control room, which uses advanced regulatory systems, instruments and computers. 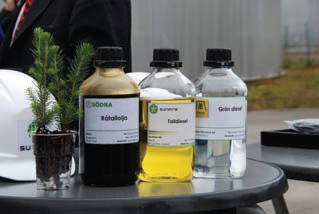 Taking advantage of its location, which offers privileged access to Sweden as well as close proximity to crude oil supply from the North Sea and Russia, the organisation’s two refineries are both connected to deep-sea harbours. The harbours enable the company to receive very large crude carriers (VLCC) and facilitate access to export markets.

Established in May 1996 when industrial firm OK Petroleum changed its name to Preem, the company quickly became a familiar brand to the public, as 400 Texaco gas stations and 130 OK stations in western and southern Sweden were rebranded under its new name and ‘bear’ symbol. Deriving from the English word ‘pre-eminent’, Preem’s biggest challenge is to live up to its name as a company that delivers a superior service to its competitors. Keen to market itself as an oil firm with a friendly, strong, customer focused side, a smiling bear was chosen as the symbol to reflect both the company’s size and professionalism.

Boasting a 30 per cent share of the overall fuel market in Sweden, Preem is also the leading supplier in the commercial market, with a 37 per cent share in diesel sales, 38 per cent in heating oil sales and 64 per cent in fuel oil sales. With a focus on the production of high quality, high margin, cost-effective transportation fuels that meet stringent standards in both Europe and Sweden, the company’s core priorities are to lead the transition to a future sustainable society. To do this, Preem AB intends to grow the share of high-quality and environmentally adapted renewable fuels it produces, minimise emissions and any other adverse impacts on the environment during the energy-efficient production of high-quality fossil fuels, grow the utilisation of wind power for electrical production and upgrade waste heat into a usable energy.

Following a three-year contract worth approximately SEK10 million that was signed in autumn 2010, Preem is further extending its co-operation with Chalmers University, in Gothenburg. A world leader in the research of renewable fuels, Chalmers has been involved in projects to enhance utilisation of waste heat and the optimisation of winter properties in tall oil. With refinery development playing a critical role in the transition from fossil to renewable fuels, Preem has chosen Chalmers as a key partner in its innovative work for future sustainability through carbon capture and storage (CCS) and the use of raw materials such as vegetable oil and animal waste. Over the next five years the two companies aim to focus on Preem’s sustainable refineries and the development of sustainable fuels in order to meet the increasingly important environmental and climate requirements.