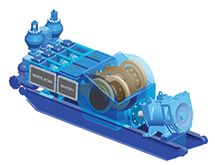 Although White Star Pump Co. is a modestly sized player in the mud pump market, it is not any less of a competitor, Vice President of Sales and Marketing Bruce Suggs says. “We have the finest mud pump in the market,” he says. “Right now, we’re in the breakout stage, where we’ve got pumps going to some of the largest drilling contractors in the world.”

A 30-year veteran of the oil industry, White, having built and sold Triplex pumps for several years, “looked at the industry and said, ‘Everything in this industry has changed except for the pumps,’” Suggs says.

That drove White to create the Quadraplex mud pump in 2006, which has 30 percent greater flow rate and higher pressure capabilites than the Triplex, while being dramatically lighter and narrower. Today, White Star Pump sees even greater benefits from the Quatro innovation as drilling pressures increase and lighter and stronger pumps are required. “[Our sales have] increased very, very quickly in the last year,” Suggs says.

Built to Last
White Star Pump’s recent innovations include the Quatro, a compact, four-piston pump that is available with a worm drive option, which is “a superior way to unitize mud pumps but is not available on triplex pumps, due to their unstable crankshaft,” Suggs says. “The worm gear has a lot of advantages.”

The worm makes things simpler by eliminating the need for belts, chains, reduction gearing and right-angle drives in the pump. The worm drive, manufactured by Cone Drive, boasts a long service life. The Quatro pump also has a modern design that has many advantages when compared to the Triplex, Suggs says. “We really like the idea of bearings and gears that will last longer than the Triplex, even under tougher conditions,” he says.

Keeping Busy
Suggs sees a strong future for White Star Pump under the continued leadership of Shaun White. “He takes the best of what doesn’t need fixing and improves everything else using proven technology from other industries when possible,” he says.

The company also will be staying busy. “We’re on schedule to be at maximum capacity in 2014,” Suggs says. It will also double its footprint. “[We’ll be] have a lot of land to grow and will be starting the new facility first quarter of next year,” he says.