As anyone in the industry will tell you, oil and gas markets are both cyclical and volatile, which results from frequent mismatches between available supply and consumer demand. In some cases, geopolitical events have constrained supply, in others economic crisis has resulted in falling demand. When prices fall, companies cut costs and reduce investments; then, when prices rise, often because of those earlier cuts, they forget the hard times and rush ahead with investments setting up the preconditions for the next price crash. It is not long ago that talk was about peak ‘oil supply’ and $100 a barrel being the ‘new normal,’ but more recently talk is of ‘stranded assets’ and oil prices being ‘lower forever.’ Thus, even before the current Covid-19 pandemic there were reasons to the think that the oil and gas industries were entering a new phase that we might call a ‘New Energy Age.’

In recent years, two driving forces have gathered pace creating what Jeremy Bentham, the Head of Shell Scenarios, has called an era of ‘radical uncertainty.’ The first is the ‘Shale Revolution,’ in North America, first in gas and then in oil, that has heralded an age of fossil fuel abundance, challenging market equilibrium for both oil and gas. The second is climate change and the low-carbon energy transition that is accelerating as a result of the falling costs of renewable power generation and storage and the increasing traction of climate change policies post the 2015 Paris Agreement. In this coming New Energy Age, it is not hydrocarbons that will be in short supply, rather it is growing demand for them.

Today fossil fuels clearly dominate the global energy system, according to BP, in 2019 they accounted for 84.3 per cent of global primary energy consumption and renewables only five per cent. However, before the recent oil price crash and the ‘great lockdown’ associated with the Covid-19 pandemic, both oil and gas markets were under stress. After failing to drive US shale oil to the wall in 2014-15, OPEC brokered a wider coalition, OPEC+, to manage production. This resulted in both stabilising the oil price and sustaining at a more acceptable level for ‘Producer Economies.’ Unfortunately, that higher price also encouraged a surge in US oil production, added to which, Russia never really reduced its exports. In early 2020, as gathering economic headwinds slowed demand growth, Saudi Arabia sough to extend the production cuts, but Russia walked away. Saudi Arabia responded by increasing its exports and the price crashed. All of this on the eve of the 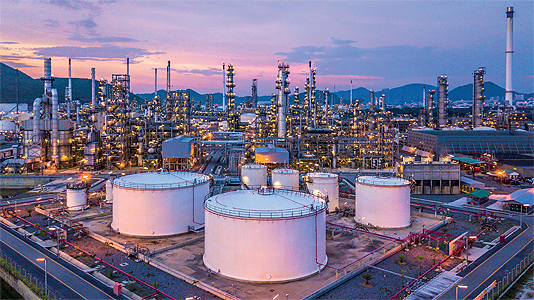 pandemic. The rest is history, an unprecedented shutdown in economic activity resulted in a 30 per cent fall in oil demand in April and forced OPEC+, plus a few others back to the table in early April to agree even deeper cuts. The situation is now in the balance, the price has recovered, but there is a growing recognition there will be no quick ‘bounce’ back, and there is speculation that oil demand has now passed its peak.

Even before the pandemic, there was recognition that natural gas faced a somewhat different trajectory through the low carbon transition. The industry has sold itself as the ‘greenest fossil fuel,’ somewhat of an oxymoron; but its green credentials have been tarnished by the environmental impacts of hydraulic fracturing and the acknowledgement that fugitive emissions along the supply chain undermine the lower carbon intensity when combusted. Furthermore, the energy of intensity of liquified natural gas (LNG) production has also called its benefits as a solution to decarbonisation into question. The global gas market suffered from oversupply as new LNG production, in Australia and the United States, outstripped demand growth. This would have happened earlier had China not embarked on a dash for gas. Initially, gas markets were less exposed to the impact of the lockdown, but summer in the northern hemisphere and already filling storage capacity have resulted in very low prices. So much so that it is no longer economic for US LNG terminals to liquefy gas for export to Europe and cargoes are being cancelled.

Having weathered the lockdown, the question is ‘what happens next’? No one really knows; the pandemic is running riot across the global south and threatening to re-emerge in Europe. The IMF has lowered it expectations for economic output in 2020. It is clear that while social distancing and quarantine remain a requirement, economic activity will be depressed. Already, some oil and gas companies slashed their dividends, some have cut their workforces and the majority are cutting back investment. But there is a very real prospect that what happens next will accelerate the arrival of the new energy age. First, because the current enforced changes in work patterns, behaviour and consumption may result in permanent changes that reduce demand for fossil fuels. Second, because the pandemic is requiring a massive amount of state intervention and assistance and recovery packages may come with green conditions attached that do not favour fossil fuels. Neither of these is certain and there is a good deal of pessimism a road. Whatever the outcome, the global economy has been dealt a massive blow that will leave an indelible mark on the energy demand curve, resulting in low prices. Talk of tight markets in the future, with a short-lived period of higher prices, will only accelerate demand destruction. Thus, the supermajors, the national oil companies and the petrostates may only have one business cycle left before the new energy age sets in, bringing with it the beginning of the end for the fossil fuel industry. Undoubtedly, this will be a long goodbye, but in an industry where investments are in the multiple billions and payoffs span 20-30 years, decisions made now face a very different future.