Founded six years ago, Africa Oil Corp is a Canadian oil and gas company with a special focus on the prospects of East Africa.

At present the company has assets in Kenya and Ethiopia, and in Puntland, Somalia (Puntland assets held through a 45 percent equity interest in Horn Petroleum Corporation). These operated and non-operated blocks contain unexplored plays in basins that have proven and productive nearby analogues.

Initially the company started out acquiring acreage and completing seismic campaigns, and as of last year launched the first stages of an active drilling programme. For 2013 this has accelerated even further with a net exploratory budget of $184 million for the year. Whilst East Africa was perhaps previously overlooked with the rush for development to the west, it seems this tide is now turning. Indeed Africa Oil Corp was the number one stock in Canada last year, suggesting significant value is being seen in its activities. 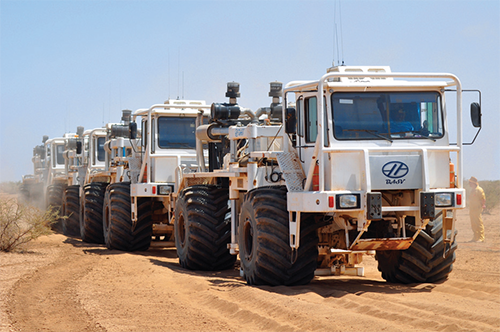 “I think now people have really woken up to East Africa, not just through what we’ve done, but the large gas discoveries in offshore Tanzania and Mozambique. The good news for us is that we were able to get in there first and have tied up most of the good acreage. This has enabled us to attract in high quality partners such as Tullow Oil and Marathon Oil, whilst we go out and drill wells and figure out what to do in the next phase of our exploration and development,” describes Keith Hill, president and chief executive officer of Africa Oil Corp.

Since the beginning of 2012, Africa Oil Corp has drilled three wells, and has just begun work on a fourth. With its first Tullow-Africa Oil joint venture exploration well, Ngamia-1, the company discovered over 100 metres of net oil pay. Following completion of this well, the joint venture partners moved on to drill Twiga South-1 in a different block on the same trend as Ngamia-1, which also successfully encountered 30 metres of net oil pay.

“The Ngamia-1 and Twiga South-1 wells both look like very sizeable discoveries, and we are very excited about the potential not only of those basins, but the entire Tertiary rift trend that they are a part of. Having tested the well, TwigaSouth-1 looks to have a combined flow rate of around 2800 barrels of oil per day (bopd), and we believe that it is capable of over 5000 bopd. We are now testing the Ngamia-1 well to estimate recoverable reserves there,” highlights Keith. Africa Oil Corp also has an active exploration programme in Somalia where the Shabeel-1 and Shabeel North-1 exploration wells have been drilled and encountered a working petroleum system but did not recover oil. There is enough encouragement to continue operations and a seismic programme is planned later this year.

Completing the current well portfolio is theSabisa-1 well in Ethiopia just over the border from the Kenyan assets, which should be completed shortly. “This well has the potential to open up the northern portion of the Tertiary rift basin,” explains Keith. “It’s a very frontier well and the first to be drilled anywhere within that area, which means that although it is higher risk, if successful it will de-risk a large portfolio of prospects up there.”

At this point Africa Oil Corp is keen to focus on the three regions it is active in – Kenya, Ethiopia, and Somalia, as opposed to pursing new ventures. With three drilling rigs already mobilised, and another three coming in, the company has an intensive drilling programme in the immediate future, which will explore some of the over 130 identified prospects and leads amongst its acreage. This includes the exploration wells Paipai-1, and Marathon Oil partnered Bahsai-1 in the Cretaceous basins in Kenya.

Before any decisions are taken about the long-term propositions for the business, Africa Oil Corp is looking to gather a lot more data about these assets and what might lie within them. “It’s really just a question of getting out and drilling the wells and trying to open up some new basins,” confirms Keith. “We think short-term it will take around 25 wells to understand how big the reserves are and how many basins are prospective. Once we confirm we have sufficient volumes to justify development, the biggest challenge will be the lack of infrastructure in East Africa. Either ourselves, or someone else, will have to build a several hundred kilometer long pipeline to the coast and a terminal, so that will be a large undertaking.”

It may still be early days for the business but the preliminary results from the exploration wells drilled so far are encouraging. Emphasising the sheer scale of return that could be possible from Africa Oil Corp’s asset base to date, Keith concludes: “We had an independent study carried out which estimated up to 27 billion barrels of recoverable gross prospective resources in these blocks. This has got us, and our shareholders, very excited as you can’t really find onshore blocks with good contract terms and this type of resource potential anywhere else in the world. The blocks we have now are roughly the size of the entire UK North Sea so it’s a very large acreage position with a lot of potential upside.”