Skip to content
You are here:Home » Best Well Services
Insights 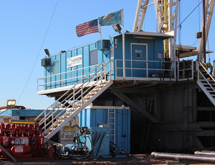 Best Well Services, based in Tulsa, Okla., is adding facilities in its home state and considering expanding its service area into Texas’ Permian Basin, while keeping informed on the latest oil and gas industry regulations on topics such as fracking, which could impact its business model.

The company began in 2007 with two roustabout trucks and four men, CEO Tim Cargile says. Today, Best Well Services is a full-service provider for oil well completion and has been operating under new ownership since 2012. Its services include water transfer, moving heavy machinery to locations, rig mobilization, well servicing rigs, roustabout services, battery installations and any other type of work that needs to be done to complete wells for the oil and gas industry. “We do a really good job of understanding what the operators need and provide very good, consistent service,” Cargile adds.

Its five yard locations can be found throughout Oklahoma in Prague, Medford, Stillwater, Red Rock and, most recently, Chickasha. “Anytime we have an opportunity for expansion come up, we look at the economic value of it – if there are any,” Cargile says. “We moved into Chickasha [this fall] and we are looking hard at moving into the Permian Basin in Texas where we can provide our competitive services.”

Constant Change
“We understand the industry is constantly changing as a whole,” Cargile explains, adding that it is not the same as it was even 20 years ago. For example, worker safety and environmental concerns have become high priorities over the past two decades and employees need to be aware of the importance of staying informed on the rules. Best Well Services prides itself on staying in compliance with rules and regulations to perform exceptional and on-time services for operators. “Customers understand that we want to be timely in everything we do from invoicing to being on location,” he explains. “We want to meet their expectations and make their job easier. Our No. 1 focus is providing services the operators need and want in a timely manner.”

Shale plays are the oil and gas industry’s biggest developments recently and operators are putting significant drilling programs in place that expand massive amounts of acres. Companies are not drilling in various spots and deciding if they want to pursue the hole anymore. Today, four wells are drilled on one pad and Best Well Services is working to stay ahead of the curve as a service provider for the shale plays. “They are massive, expensive and time-consuming,” Cargile adds. “What this tells a service company is that if we can get in front, stay ahead of the curve and provide consistent service for them, companies can plan more extensive drilling schedules and plan along with the development as they go forward.”

Regulations on fracking are changing in many areas; for example, it is no longer allowed in New York, which may change the way drilling is performed and impact Best Well Services if the same restrictions are applied in Oklahoma, Texas or Kansas – the company’s main service areas. “There is a lot of interest on fracking in the general community believing that it’s dangerous or will have a negative impact on the area,” Cargile explains. “I don’t believe that. The zones are below the ground and there is not that much vertical segregation in regards to the water.”

Best Well Services would change its business expansion plans and services if fracking were no longer allowed in its service area because the number of wells being drilled would significantly decrease. “We are setting strong foundations in our current locations and we use the same footprint every time we open a satellite office,” Cargile explains. “If for some reason this affected Oklahoma, Texas or Kansas, it would drastically change our development programs in our satellite offices and the services we provide. If regulation was going in a direction that would not be beneficial, we would look at other ways to increase our footprint and expand to new locations.”

Compatible Employees
The greatest challenge in the oil and gas industry, Cargile believes, is finding good employees and retaining them. Best Well Services has 265 employees and most positions require strong skill sets and a great work ethic.

“We are constantly working to bring in the best possible employees and teach them to take the job seriously with integrity, honesty and hard work,” Cargile adds. “We have a good group of managers and supervisors that can teach that philosophy, but it’s always a challenge to make sure the right individuals can execute the work in a manner that’s up to our standards.”

When the company hires an employee, he or she is put through a training, safety and compliance program taught by third-parties before they are put to work. The time spent in the classroom varies depending on the individual’s skill level before being hired by Best Well Services. New hires are required to spend eight hours in safety classroom instruction prior to performing their job duties. When inexperienced employees make it out to the field they are paired with a more experienced worker and operate using the buddy system. “It’s a great opportunity for the next generation to come in and secure a high-paying job,” Cargile says. “We are cycling through resumes on a daily basis. It doesn’t matter how well equipped or financed you are if you don’t have the right employees.”

Although finding good employees can be a challenge, Cargile says the individuals who do work in the industry are what continue to make it unique. “You have some of the highest-educated people you will ever meet working with individuals who may not have finished high school, but are a tremendous asset,” he explains. “It’s a very diversified industry.”

Bright Future
The oil and gas industry is exciting for Cargile. He believes it’s an extraordinary honor to be part of pouring new money into the economy that was not in play before. “I never wanted to be part of something where I take one dollar and try to make it into three,” he explains. “What I love is that there is a lot of risk involved. Companies spend a lot of money to drill a well in hopes it will produce gas or liquid to create new values. This is something that we as a country really need; it adds tremendous value.”

Keeping with its commitment to add value to the country, Best Well Services’ employees give back to its communities by participating in state and regional Chambers of Commerce, donating to United Way and coaching sporting events. “We really try and lead by example and have employees involved in the community to not only better their own lives but those around them,” Cargile says.

Best Well Services expects 2014 will be a great year with more opportunities to service the oil and gas industry. “We have a strong footprint with the communities we are in and we are looking to expand our business because there is tremendous opportunity out there,” Cargile says. “I think it’s a bright future.”