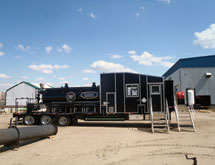 Colter Energy Services Inc.’s commitment to safety goes beyond inspections and meetings to permeate every aspect of the company and its operations. In fact, that commitment has driven the company since its founding.

Company President Clay Bradley and Vice President of Operations Ed Ha established the company in 2008, taking the experience they had gained from a company they operated from 2002 to 2006. Initially, the company solely rented a safety platform it invented and patented after observing a need among crews working on wellheads. “We saw the use of rigless well completions becoming more and more popular, so we saw there was a market out there on the safety side of things,” Ha says.

The safety platform – dubbed the wellhead access safety platform, or WASP – features a hydraulic floor that can be lifted up to 12-and-a-half feet high and accommodate eight people. The WASP is a single-piece platform that is easier to set up and operate than scaffolding or other platforms. In 2010, the company won a workplace health and safety innovation award from the Occupational Health and Safety Council recognizing its work on the platform.

Colter’s offerings have greatly expanded beyond equipment rental to include a suite of production testing and well completion services. The company serves oil and gas producers in the Bakken Shale in North Dakota, where it first established operations in 2010.

The company’s customers in the Bakken include notable players such as Whiting Petroleum. Colter’s capabilities include frac recovery, well clean up, production analysis, inline testing, and well completions. Colter specializes in all well types from high-pressure, deep critical sour wells to lower pressure, sweet wells. “We are one of the leading providers bringing solutions to any production problems that may arise in the Bakken,” Ha says.

WASPs remain a large part of Colter’s operations, as the company rents and operates seven of the platforms. Other assets include 17 portable and skidded horizontal P-Tank testing vessels and four frac trailers. The P-Tanks are capable of both three- and four-phase separation. Colter Energy has 21 crews operating in the Bakken, as well as five crews in Western Canada, where it established operations in 2012. All equipment is ISO certified for H²S gas service and sweet gas service.

‘Ahead of The Curve’
Colter Energy is becoming one of the Bakken’s leading providers of production testing services largely because of its emphasis on safety procedures as well as the level of experience of its staff. Most of the company’s supervisors have 10 to 15 years of experience, which is particularly important in the Bakken, as many production testing supervisors have significantly fewer years on the job due to the recent growth in the industry, Ha notes.

“The level of expertise we have is so high, that a lot of people have taken to us because we do our jobs as safely as possible,” he adds.

Colter Energy backs up its internal safety program with a number of partnerships, including with the Alberta Association for Safety Partnerships. The company is also a member of PEC Premier Safety Management and ISNetworld. All of these agencies regularly audit and grade Colter Energy on its adherence to proper safety procedures, according to Ha.

“When we first arrived in North Dakota, proper safety procedures here were few and far between, but we knew it would eventually catch up as activity grew,” Ha says.

“Our company has always been ahead of the curve with regard to safety standards, and I think that’s one of the things that makes us attractive.” EMI