Essar Oil is a subsidiary of Essar Energy, the London-listed oil and gas and power company, which currently has 741,000 barrels per day of refining capacity, mainly at its large refineries at Vadinar, India and Stanlow, UK.

Essar Oil also has a growing exploration and production business with large potential, including a global portfolio of 15 onshore and offshore oil and gas blocks spanning approximately 35,000 square kilometres. Essar Oil has a network of over 1400 fuel retail outlets across India, with a further 200 in various stages of commissioning, while on the power side, Essar Energy also has a generation portfolio currently totaling 3910MW of capacity, with a further 2890MW in various stages of construction.

Essar Oil’s business is very much focused on India, and although its exploration and production (E&P) activity includes blocks in Nigeria, Madagascar, Indonesia, and Vietnam, the current focus is on developing its assets within India. Overall, the E&P portfolio equates to 2.1 billion barrels of oil equivalent of reserves and resources. “The assets outside of India are in the conventional space, so classic oil and gas exploration, whilst in India there is a mix of unconventional and conventional prospects,” describes Ifty Nasir, CEO of E&P.

“On the conventional side we have four blocks, one is in offshore Mumbai, one in the Cambay Basin, and a couple in Assam to the east of the country. When it comes to the unconventional hydrocarbons these are predominantly in the form of coal-bed methane (CBM) located in the east,” he continues.

Although all of Essar Oil’s E&P businesses are considered important, at present more attention is being given over to India where the company is currently developing its first coal bed methane asset, the Raniganj block in West Bengal. “CBM has been around for a long time, but there are very few true economic developments in India,” elaborates Ifty. “Aside from our Raniganj block, the other producer in India is Great Eastern Energy Corporation Limited, with their block a little further to the west. Theirs is a more paced and steady production growth, typical for CBM projects. Raniganj has a far faster development phase that should have a production profile not dissimilar to a conventional oil and gas field.

“We are achieving this through a much higher rate of drilling and hydrofracturing than would normally be the case in CBM developments, having drilled over 100 wells in the last year and with plans to do a couple of hundred more in the coming one. This results in efficiencies that come with a critical mass of activity, and accelerated production, which improves the economics,” he continues. 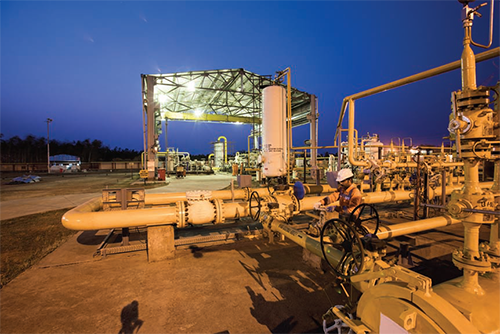 The second project that Essar Oil is pursuing is the conventional oil block in the Cambay Basin. “As an oil prospect it’s probably not the most exciting, but below the oil horizon we believe there is serious shale gas potential, which we’ll also be looking to develop in due course,” highlights Ifty. “This is not part of the reserves that are in the books, it’s something that is pretty new and that we believe has great potential.”

He continues with how Essar Oil will be looking to maintain a mix of both unconventional and conventional assets in its E&P portfolio long-term: “It’s important to have both sides because there’s the potential for cross-pollination of ideas, and optimisation. This is particularly true if we are looking at a future where the government allows what they call a simultaneous development. This is a policy that is in progress, and essentially enables an operator to not only exploit a certain set of horizons or resources, be that coal, oil or shale for example, but to develop all the hydrocarbons within that geographic location.”

That said Essar is also looking to become one of the leaders in the unconventional industry in India, and is already well thought of in that respect. This aspiration can be seen in the company’s formation of a new CBM and Unconventional Resource centre in West Bengal to support the unconventional sector. This includes exploring specialised types of drilling and hydrofracturing, as well as managing surface risks and minimising environmental impacts.

A number of other crucial developments have been taking place in India as of late. These include moves by the Indian Government to develop a policy on shale oil and gas, which has been in the works for sometime, and announcements that Ifty believes are of importance to the progression of the business: “The government has just declared the new gas price policy which has moved from $4.2 per million British thermal units (mmbtu) to $8.4 per mmbtu. It’s a policy, but a move which results in a far more competitive price both for the producer and consumer. Simply put, the price is derived through a combination of international gas prices in established markets, where gas to gas competition already exists, and landed LNG prices. This will be applicable from April 2014, however if it were effected today, it would result in a gas price of circa $6.83/mmbtu based on assumed regression of the Rangarajan report recommendations upon which this gas policy was based. This policy should help encourage more players into exploring and producing gas in India, thereby reducing the average cost of gas in the country.

“This should incentivise investors to come into India and start exploring and developing the gas reserves in particular. India is very short on gas, with circa 60 per cent currently imported, which puts pressure on foreign exchange reserves, as well as making it vulnerable to market spot price which is presently over $16. As such developing oil and gas in-country does a number of things. Firstly it presents a source of gas that is significantly cheaper than that which is imported. It will also help India to develop this sector through both domestic and foreign direct investment,” he notes.

Increasing amounts of gas also enables energy consumers in the country to switch over from other types of fuel such as diesel, which are more expensive and more environmentally damaging, making businesses more competitive. Likewise with methane considered the cleanest of all the hydrocarbons, this shift will allow India to progressively move towards a lower emission environment.

Reflecting on the direction of Essar Oil’s E&P business in the coming years, Ifty describes how it closely reflects its current attention split: “The near-term focus is very much about exploiting and developing the assets we currently have in our portfolio, building a solid platform/foundation on which to build new opportunities. This includes being able to bring other partners into the assets we already hold through farm-downs and strategic partnerships in and outside of India. It also allows us to explore the potential for other geographies through joint venture, or farm-down partners that may come to work with us in India.”

Essar Oil
Services: Oil refining and retailing, and producer of oil and gas