Fluxys is a Belgium-based natural gas infrastructure group operating on the European market.

The company is a major gas transit operator and its offering combines gas transmission, gas storage and terminalling of liquefied natural gas (LNG). Besides its pipeline, storage and LNG terminalling assets in Belgium, Fluxys’ partnerships include ownership in the Interconnector and BBL pipelines linking the UK with mainland Europe, the Dunkirk LNG terminal under construction in France, the NEL and TENP pipelines in Germany, the Transitgas pipeline in Switzerland and the TAP pipeline from Turkey to Italy, to be constructed to take gas from Azerbaijan to Europe.

Fluxys has developed its Belgian grid into a crossroads of gas flows in North-Western Europe. The 18 interconnection points on the Belgian grid are opening the network to natural gas flows from the UK, Norway, the Netherlands, Russia and all LNG producing countries. marketsDownstream the grid serves as a rubik’s cube for gas flows to the UK, the Netherlands, Germany, Luxembourg, France, and Southern Europe. Since 2009 Fluxys has extended its Belgian base into a tentacular infrastructure throughout Europe to accommodate flows and trading on a broader level, with an asset and capacity portfolio in eight countries.

One of the major projects of the company is the so-called reverse flow project for the Swiss Transitgas pipeline and the German TENP pipeline. On the route between the UK and Italy, the Interconnector pipeline linking the UK to Belgium and Fluxys’ Belgian grid is currently the only infrastructure capable of moving natural gas in both directions. The TENP and Transitgas infrastructure, as well as the Italian grid, are only designed for north-south flows.

The development of south-north capacity between Italy and the UK is a first in Europe. It will strengthen security of supply by opening up additional supply opportunities for North-Western Europe from Italy, where two new supply arteries will reinforce the currently available sources: the TAP pipeline, which is to bring gas from Azerbaijan into the south of Italy, and the South Stream pipeline, which is to bring additional Russian gas to the north of Italy. Creating south-north capacity will also enhance market liquidity, as the Italian trading point (PSV) will be linked in both directions with trading points in Germany (NCG and Gaspool), Belgium (ZTP) and the UK (NBP). 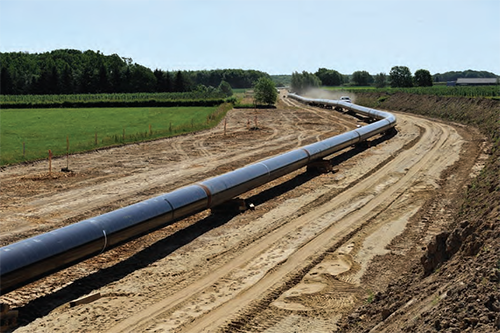 Key to Fluxys’ infrastructure is the Belgian Zeebrugge area: the facilities in the Zeebrugge area have a combined landing capacity of about 50 billion cubic metres per year, corresponding to approximately ten per cent of the border capacity needed for supplying the entire European Union. Among the facilities is Fluxys’ Zeebrugge LNG terminal. It is one of the few terminals in the world that can accommodate nearly all LNG ships in circulation, from small ships (7500 m³ of LNG) to the largest carriers (266,000 m³ of LNG). The facility has a throughput capacity of nine billion m3 of gas per year and has received over 1300 ships since it was commissioned in 1987. One of the main advantages of the Zeebrugge LNG terminal is the destination flexibility it offers, as terminal users can choose from a whole range of destinations for their natural gas. They can either trade it at the Belgian trading points or move it via Fluxys’ Belgian grid to supply the Belgian market or other end-user markets in Europe, such as the K, the Netherlands, Germany, Luxembourg, France and Southern Europe.

Currently Fluxys is also developing the Zeebrugge LNG terminal into a hub for accommodating the use of LNG as fuel for ships and heavy-duty trucks. A second, multifunctional jetty is currently under construction, which is to accommodate both ship unloading and loading operations and will be capable of receiving LNG carriers with capacities from 2000 m3, including so-called bunker barges and feeder ships. These carriers load LNG for supplying other ships using LNG as fuel or intermediate LNG storage facilities. Over 200 loading slots already have been booked for small LNG ships.

With the second jetty scheduled to be ready in 2015, the facility is set to accommodate the shipping industry’s transition to LNG as fuel by the time very stringent sulphur emission standards come into force in the North Sea, the English Channel and the Baltic Sea.

Another small-scale LNG feature of the Zeebrugge LNG terminal is the possibility to load LNG tanker trucks, with a capacity of over 4000 truck loadings per year. Currently, most of the trucks filling their tanks with LNG are bound for the UK, the Netherlands, Germany and Poland. Transporting LNG by road is a new but highly promising activity which supports the use of natural gas in a broader range of applications: supply of European industrial sites not connected to a pipeline network; supply of ships using LNG as fuel; and supply of filling stations for long-distance haulage trucks using LNG as a fuel.

In its LNG terminalling activity Fluxys, with EDF and Total, is also partner in the LNG terminal being built at Dunkirk. The terminal is due to be operational by 2015 and will have a capacity of 13 billion m³ of natural gas per year, which will contribute significantly to strengthening security of supply and to the effective functioning of the market in North-Western Europe.

Alongside construction of the LNG terminal in Dunkirk, Fluxys and French transmission system operator GRTgaz will lay a pipeline to connect three infrastructures: the Dunkirk LNG terminal as a new gas entry point for Europe, the network of French transmission system operator GRTgaz and Fluxys’ network in Belgium. This combination will allow up to an additional eight billion m³ of natural gas to be flown into Belgium and elsewhere in Europe from the Dunkirk LNG terminal, thereby strengthening security and diversity of supply.