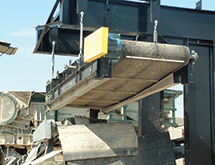 A magnet is only as good as its ability to hold onto something, and that’s why it’s telling that Michigan-based Industrial Magnetics Inc. has been able to hold onto a leadership position in serving multiple industries for more than 50 years. In the energy and mining sectors as well as numerous other market segments, Industrial Magnetics applies the same principles of hard work and quality that have made its magnetic and electromagnetic assemblies a vital component of customers’ operations for years. As President Dennis O’Leary explains, the company’s ability to develop custom solutions with market-leading lead-times will carry it into the future as it further diversifies its customer base.

Industrial Magnetics was founded in 1961 in Detroit, where it primarily served the automotive industry with small electromagnets used to hold components in place during assembly. Over time, however, the company broadened its focus to serve other sectors, and today Industrial Magnetics has a core of more than 20 markets that it serves regularly. These include mining, energy, food production, material handling and pharmaceuticals. O’Leary says this diversity gives the company a unique position in an industry populated with niche players, and has helped it become the third-largest magnetic assembly manufacturer in the country. “We’ve got a lot of different competitors, but many of them serve different market niches than we do,” he says.

Quality and Precision
Industrial Magnetics serves a broader base of customers than many of its competitors, but even though the applications for its products vary in every sector, the quality of its products remains consistently high. O’Leary says Industrial Magnetics refuses to cut corners when it comes to the materials it uses in its products, with focus on building a rugged, industrial-grade magnet that can survive rough environments no matter what the end-use will be. Even though this cuts into the company’s bottom line, O’Leary says it is worth it to maintain Industrial Magnetics’ strong reputation for quality products. “Our goal isn’t to get rich, it’s to provide a quality that meets our customers’ needs,” he says.

Just as important as the materials Industrial Magnetics uses is what it does with them. O’Leary says the company has become known throughout the industry for developing effective customized magnetic solutions for its customers and being able to deliver them on an expedited schedule. Nearly 70 percent of everything the company builds is made to custom specifications, and in most cases they are built specifically for one particular customer.

The relatively quick lead-time Industrial Magnetics can achieve on these unique solutions is another key advantage for the company, according to O’Leary. “Our time to market is industry-leading,” he says, adding that the company can turn around a product in about four weeks at most, compared to six to eight weeks for most of its competitors.

Serving the Sector
In the energy and mining sector, Industrial Magnetics provides magnets that serve as physical protection for customers. In applications including goal mines, potash mines, coal power plants and biofuels operations, magnets are used to prevent contaminants such as iron from being conveyed with other materials into processing equipment that can be severely damaged by tramp iron in sizes ranging from particles to large pieces such as bucket teeth froma front-loader.

On the Horizon
O’Leary says the biggest challenges for Industrial Magnetics today are issues that largely are out of its hands. In addition to the general state of the economy and the effect that uncertainty has on purchasing managers, the company also has reason to be concerned about sourcing of magnetic materials, nearly 95 percent of which come from China. Without other sources in significant quantities anywhere else in the world, O’Leary says the entire industry is reliant on China. “The only thing that would concern us- or anyone who makes a living creating magnetic circuits-would be if China just said, ‘That’s it, we’re done.’ It wouldn’t make sense because the world’s current usage creates a favorable supply/demand scenario for China and they couldn’t domestically absorb the current product they export, but it does exist as a possibility no matter the probability,” O’Leary says.

Despite the concerns, Industrial Magnetics has its eyes set on the future. O’Leary says the company is looking at expansion through building larger magnets that would open up new opportunities. He says the company also is looking at new technologies that would allow for more precise control. “Magnets are dumb technology, they don’t discriminate,” O’Leary says. “Our goal is to provide smarter technology.”