Since it was last featured in European Oil and Gas Magazine, Koso Kent Introl (KKI) has continued to expand on its position as a leading supplier of specialist valve solutions across the global energy and offshore market.

In that time, the company has been determinedly engaged in the expanding offshore and subsea sector. In the financial year from April 2011 to March 2012 the company’s orders rose by 36 per cent, which in managing director Denis Westcott’s words is “really a growth figure that speaks for itself.” Following on from this success Koso Kent Introl has actively pursued a programme of investment and development to ensure it remains strong in a competitive industry, while exceeding customer quality expectations.

In 2012 the company commissioned a new machining centre at its Brighouse production facility. The state-of-the-art Scharmann Ecoforce 1 HT2 represents a £2 million investment, which will allow the company to further increase its production capacity in coming years as Denis explains: “The Ecoforce is a modern, reliable machine purchased primarily to deliver angle style bodies, typically used for topside choke and subsea valves, in one operation. It allows castings of up to three tonnes in weight and 1.5 x 1 x 1 metres in size, which enables the production of angle style body castings to approximately 18 inches in connection size. Prior to the installation of our new machine, large angle bodies were produced on two separate machines, whereas the Ecoforce provides the need for just one machine and therefore produces individual bodies much faster.”

To maintain its market-leading dedication to quality, the company has also invested in a submerged high-pressure gas testing facility and its Kent Introl Business System (KBS), which has been in operation for the past two years. KKI’s continued improvement programme has led to the introduction of a visible process flow system for all products from receipt of order through to manufacture, testing and dispatch. The implementation of this process has made the production and dispatch procedure much more visible to the relevant employees, KKI management and visiting customers. The KBS process has also led to two active projects, which are expected to come to fruition by late Spring or early Summer 2014. Firstly the company is set to roll out a new business system, which will control all functions from quotation to dispatch. It will be designed to build on the company’s existing system and incorporate other areas that were previously out of scope. Secondly, KKI intends to modularise its product portfolio to enable it to meet exact customer expectations and reduce variation. 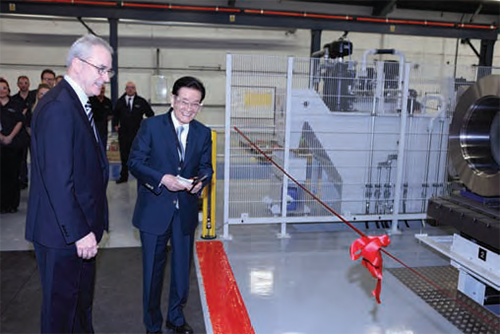 The visible nature of its production process has become a vital part of the company’s quality control process as oil and gas operators seek to obtain the highest possible quality in its components. As Denis explains, “During the last couple of years, most of the major oil and gas operators have introduced significantly enhanced specifications for both the production and acceptance criteria for Duplex and Super Duplex stainless steels. This imposes a very high level of quality assurance and quality control, not only on the valve supplier (KKI) but also the foundries being used. KKI invariably uses UK based foundries who are specialists in casting these materials, but even so, these specifications have raised the bar and made the challenges of compliance even more demanding.”

The company’s commitment to improving its design and construction processes are also representative of the level of importance it places on health and safety and the environment. Again, these are becoming key focus areas within the industry and KKI works hard to maintain its lead in this field. “Over the past year or so, we have seen a substantial increase in the number of audits on KKI carried out by our existing and potential customers. We continue to see quality-focused audits but the number of audits focusing solely on health, safety and the environment is increasing,” Denis highlights. “Our internal quality, health, safety and environment function ensures that we continue to receive very favorable audit reports.”

The reputation that KKI is able to maintain has enabled it to work with a number of significant projects and operators throughout its history. Currently, the company has frame agreements in place with Statoil and ConocoPhillips for the GEAD project and Lundin for the Edvard Grieg project. It is also the key supplier to a number of gas and oil companies including BP and can boast a working relationship with Statoil that has lasted close to 40 years. “We have a good working relationship with Statoil and a significant installed base, not only onshore but also offshore, both topside and subsea,” Denis elaborates. “This, combined with our recent investments and the quality of our supply, has allowed KKI to extend its current frame agreements by two years and also resulted in KKI being selected to refurbish existing subsea chokes valves, which have typically been in service with Statoil installations in Norwegian waters for between 12 and 18 years.”

As 2013 progresses and the company looks to the future, its main aims will be to continue to grow and expand its claim on the offshore and subsea sector. Its excellent reputation for quality and its extensive range of valves, actuators and subsea products puts KKI in good step to make impressive headway in offshore waters in the coming years.