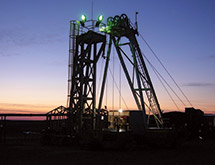 For P&E Mining Consultants Inc., being small is an advantage that gives it more flexibility, President Eugene Puritch says. “[It] allows us to react quickly to the needs of the clients,” he says.

“People can call me up on a Saturday morning and say they want a conference call, and by lunchtime, I can do it,” Puritch describes, noting it would take much longer for larger firms to set up a call. Prompt and effective communication is everything in this business.

Based in Brampton, Ontario, with a branch office in Vancouver, P&E provides geological and mine engineering consulting reports, resource estimate technical reports, preliminary economic assessments and pre-feasibility studies. Often, Puritch says, people will refer to the company as “a boutique geological and consulting firm.

“Our boutique style is treating clients on an individual, customized basis,” he says. “We’ll tailor-make the report to fit the budget and requirements. That’s why we’re performing reasonably well during the current downturn in the market.”

Puritch and Dr. Wayne Ewert co-founded P&E in 2004. “We used to ride the transit system between Brampton and Toronto,” Puritch recalls. “There was a lot of time for us to have discussions, and we conceived the idea of setting up our own private practice.”

The two initially operated their businesses out of their homes, but eventually rented a small office. “Much to the credit of my wife, she put her foot down and said my business had to leave the house,” Puritch recalls. “At one of [our] Christmas parties a few years ago, I gave my wife credit for how she was one of the main instigators in the start of P&E.”

Evolving Industry
Ewert has retired from P&E, but Puritch continues to lead it with a staff of 23 associates. Today, its portfolio includes more than 250 technical reports on diamonds and metallic deposits, including gold, silver, base metals and iron.

Its customer base also has evolved, Puritch says. Two years ago, much of its work consisted of high-level feasibility reports. “A lot of that work has gone by the wayside,” he says. “Today, [the client] typically is a mid-tier emerging producer, looking for qualifying reports for their stock exchange listings or financing documents.”

Puritch has been aggressive in growing the business, which included adding an office in Vancouver. “We have a strong presence there,” he says, noting that its second office specializes in being agile and this capability trait has won several contracts.

“The clients get a fairly immediate response from us,” he says. “There’s nothing clients hate worse than when the consultant goes silent for a few days on them in the midst of a project.”

This has resulted in many disgruntled clients coming to P&E and staying with the company, Puritch says. “Probably 60 percent of our work is repeat business,” he says.

Making it Work
Despite P&E’s physical presence, two-thirds of its staff does not regularly come to work at its two office locations, Puritch says. Instead, they work at home and occasionally make office visits. Each associate is an independent subcontractor subject to senior management discretion. He notes that many told him P&E’s remote associate business model would not work.

“We proved them wrong,” he continues. “You have to have the right type of people and they have to understand the responsibilities associated with that type of working arrangement.”

Growing with the Market
“The future for us is to maintain the presence we have,” Puritch says. “[We want to] be able to react and go with this market.”

P&E will grow as the industry turns around, he predicts. “That’s the reason we’ve started business development at a small office in Vancouver,” he says. “We have a reasonably sized client base out there and want to expand.”