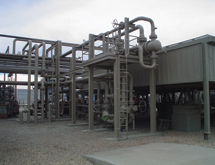 When Gary Doven and his wife, Shauna, founded GWD in 2002, they were combining their experience in the mining, oil and gas industries. Gary had worked as a designer and design manager for engineering firms and Shauna, who started her career as a designer, had spent several years at an operating company where she managed environmental compliance and safety for oil and gas operations.

“For a company started out of our house and without the expectations of being as big as we are, everything we did was based on being a small company, and while we are no longer that small company, we still maintain the culture and the feel of a small company and engage our employees at a personal level,” Gary Doven says. In February, GWD was acquired by employee-owned STV. Formerly the GWD president, Doven is now a senior vice president of STV Energy Services Inc., and Shauna is a vice president. Other officers of GWD have also joined STV in management positions.

“We hired 49 employees in 2013,” Doven says. This rapid growth and a client base of 25 made the company an attractive acquisition for STV. This combined practice will be known as STV/GWD.

Due Diligence
Besides the two companies’ complementary skills “outside and inside the fence,” they also complemented each other geographically. “When we look at the two companies together – from our client base to our geographical areas to the services we offer – there’s not much overlap in any of these areas, which is going to make us a stronger player and bring many more opportunities to both companies,” Doven says.

“Not only do you have the complement of services between the two companies, but our cultures are very similar,” Doven explains.“Shauna and I wanted to be sure this was going to be the right thing to do for our employees who have helped us get to this point. For a company as large as STV, the culture is still very much the same as the culture we’re trying to instill in our company.”

Doven and his wife examined other acquisitions in the Denver energy industry to determine what made them successful and spoke with STV’s upper management to learn the company’s goals and aspirations. Their conclusion was that the acquisition would strengthen GWD and create additional opportunities for its employees.

The Next Level
With its rapid growth, GWD by itself was competing with big and small energy services companies.

“Our two challenges were the availability of quality people and managing the growth pattern that we’ve had,” Doven declares. “The industry right now is going gangbusters, and it is really tough to find the number of people you need to do the projects you have at hand. GWD’s next step was to grow from 100 employees currently to 150 to 200. That was going to be a really tough step.”

GWD’s clients now have access to a multitude of pipeline services, including engineering design, environmental, permitting and construction support, along with the services they are currently receiving from STV. Both companies have provided project construction for their owners. Now together, STV/GWD can provide a much broader array of services to the oil and gas industry.

Doven attributes GWD’s success to its ability to meet schedules and offer a full range of services. “Anybody can tell clients ‘no,’ but we’re somebody who can sit down and say, ‘We can’t do this, but here’s what we can do,’” Doven asserts. “At that point in time, they’re all ears. They want to know what you can do. That is one of the things that has made us successful.”