Vopak is the world’s largest independent tank storage provider, specialising on the storage and handling of liquid, chemicals, gases and petroleum products.

Unlike many of its competitors, which maintain a more regional presence, Vopak has amassed a portfolio of 84 terminals that extends from its headquarters in Rotterdam out across all five continents, and is overseen by a staff of 6000 employees.

“We are primarily focused for the time being on maritime terminals based in strategic ports, which we consider to have a long-term requirement for either trading, or import and export of products. This network is developed across industries, which means that as well as petroleum derivatives and chemicals where we have a historical position, we also handle edible oils, biofuels, and recently, LNG,” describes Vopak’s CEO Eelco Hoekstra.

Over the last decade Vopak has increasingly concentrated on storage as its core business, divesting itself of its shipping, distribution, and other activities in the process. “In growing our business we have been able to identify those locations where we believe our assets are required, not only today but for the longer-term,” highlights Eelco. “Testimony to that fact is that we were the first to invest in Fujairah against the doubts of many, which has since grown beyond anyone’s imagination.

“Perhaps most crucially important though is our ability to execute. Even if you have that location, on a daily basis you need to present yourself as a leading operator, to be safe, and have high levels of service, quality, and quantity control on a 24/7 basis. This is what has given us that standing in the industry,” he continues.

As a company that is close to the global energy markets, one of Vopak’s most recent investments – the newly opened storage terminal in the Port of Eemshaven has been largely in response to requirements emerging close to home. This development was fundamentally driven by the International Energy Agency’s regulations for strategic storage, and how this is then translated into the European Union (EU) requirements. With all EU nations obliged to have 90 days of strategic stock available in case of supply disruption, Vopak believes this requirement will increasingly become an important part of the dialogue between different countries within Europe. 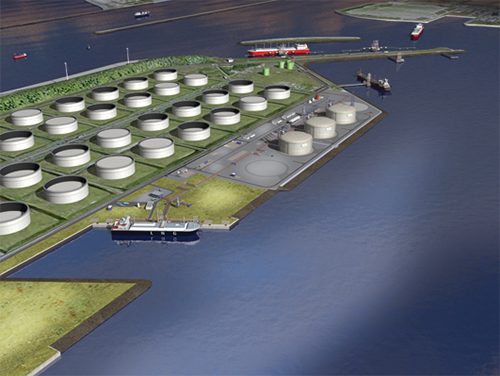 “As the Netherlands’ key port, developing strategic storage in Rotterdam, which is a high throughput orientated location, is slightly contrary to what you actually want to achieve with this,” explains Eelco. “On this basis we came to the conclusion that the Port of Eemshaven in the north of Holland was particularly well suited as a port to facilitate strategic storage. Therefore we have invested in this new terminal infrastructure, which serves on the one hand strategic storage needs for government in Europe, but also benefits Rotterdam in not using valuable throughput for this type of stock. We hope that the Eemshaven terminal will lead other European countries in the vicinity such as Germany and Belgium to consider Holland as a benign political and stable environment to keep their strategic stocks in.”

Other major developments have also taken place in the Vopak network, including the recent acquisition of the Coryton Oil Refinery in the UK, as part of a consortium with Shell and Greenergy. This site is to be closed down and transformed into a state-of-the-art blending facility, which will act as a long-term and reliable entry point for fuels to the UK market. In this development Vopak is playing the same role as it does across the globe in terms of operating and managing the terminal, with the intention of having the first tanks available by the end of 2013.

Elsewhere in the world, Vopak has recently announced a joint venture investment with Sabic for a tank storage facility at the King Fahd Industrial Port at Jubail, Saudi Arabia. This will cater towards the growing chemical manufacturing industry in the region and assist in the export of these products.

Over the last year Vopak has taken great steps into the LNG sector with the opening of the Gate terminal in Rotterdam together with Gasunie, and acquisition of the Altamira Terminal in Mexico in partnership with Enagas. “Since this time we have established ourselves as a credible player in this market, from a commercial, operational, and technical point of view, based on our traditional model of independent storage,” describes Eelco. “With its attractive economic and environmental properties, we believe that gas will play an ever increasing role in the global energy market. As such Vopak is developing future products in this business – both in strategic maritime locations at big ports to facilitate trading and regasification of LNG, and simultaneously at smaller ports where LNG as an alternative to transport fuels might be used.”

Undoubtedly the development of LNG will not happen overnight, but Vopak is hoping to help support this concept through the construction of a new small breakbulk LNG facility next to its existing Gate terminal. As a large bunker market for fuel oil, Vopak believes Rotterdam should have the ability to bunk LNG going forwards, whilst its location also acts as a future transmission point for the Baltic market.

“There are many companies with a vested interest in selling gas that are looking for a business model to start selling these resources and LNG more widely in Europe, so we believe the long-term outlook for infrastructure in the energy sector remains positive,” concludes Eelco. “The world population continues to grow, and as such there is a lot of work we need to do as a total industry to get the right energy resources and chemicals to market, and I believe that independent storage providers will play a role in this.”