Based in Ålesund in the middleof the offshore cluster on the country’s west cost, GEOFF has over 80 years of excellent shipping history and has worked with many of the industry’s super major names. The company has restructured lately and is now looking toward expanding its fleet and market segments from its base office in Ålesund.

CEO for the company, Capt. Per Ivar Fagervoll, explains more about its history: “GEOFF has a long history dating back more than 80 years and today has its third name over the years, the longest running of which was Ugelstad Rederi.From 2007 u ntil the summer of this year it was known as Aries Offshore, but after beingbought in July this year was changed to Golden Energy Offshore. The company is now 100 per cent owned by one of the largest ship owners in Greece, the Restis Group.”

GEOFF offers clients the opportunity to hire vessels and crew fully equipped for any number of service and support roles they might need. Such services include general supply duties such as transporting cargo to and from offshore platforms, specialised support duties like maintenance and trenching operations, remotely operated vehicle (ROV) back up, fire fighting, deep water diving support and vertical seismic profile (VSP) logging amongst others. Many significant names have made use of these capabilities including BP, ConocoPhillips, Dong Energy, Statoil, Talisman and Total, mostlywithin the North Sea basin but also, more recently, off the coast of West Africa.

Fagervoll illustrates this further: “We undertake platform supply duties for oil majors, running to and from port and platform with cargo and other general supplies. What we are very proud of is 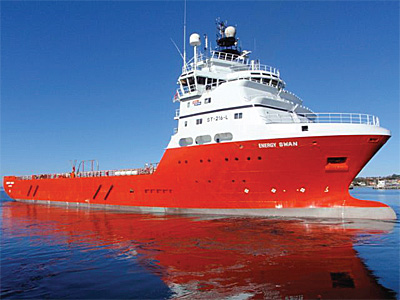 that we have a long relationship with all of our customers. For example, one of our vessels has been on contract to ConocoPhillips for 25 years, with more than 2000 cargo runs between the coast and the Ekofisk oilfield.”

This vessel, the Energy Girl, is one of four owned by the company. It was built at the Liaaen shipyard in 1985 to have high capacity bulk and deck cargo capacities and has four tunnel thrusters and the ability to carry mud and brine and other liquid product as required by charterers. The other three vessels owned by GEO are Energy Lord, Energy Swan and Energy Scout. Energy Lord is the company’s oldest ship, built in 1984, though it has had its automation and switchboard systems renewed in 2000. It is an all-purpose vessel with towing and oil rec capabilities, 553 square meters of cargo space and emergency rescue facilities.

The other two vessels, Energy Swan and Energy Scout were both built in 2005 and have more advanced capabilities. The former, for example, has been designed with a high speed of 18.5 knots and a large 1060 square meter deck making it ideal for station keeping, pipe carrying and ROV support. Meanwhile the latter is a smaller, 693 square meter vessel that has in the past been used for accommodation units and diving support operations.

The capabilities of these ships make GEOFF a strong company, but as Fagervoll highlights it also has a number of other advantages to offer: “We have a very well maintained and sophisticated fleet, and an extremely talented and reliable crew with a lot of expertise to operate the vessels. The company’s management team also has many years of experience in the offshore industry. We have had a long track record of great health, safety and environment (HSE) statistics, with no injuries or time loss.”

There is a heavy focus on health and safety within the company, with an in-house ten-point guide that forms the basis for its HSE safety management system. This system is further backed up by industry-recognised safety accreditations from Det Norske Veritas (DNV) and First Point Assessment (FPAL). A strategy of ongoing personnel training and setting measureable targets for improvement ensures the company maintains a high quality safety record.

Since the Restis Group bought the company in July 2010, GEOFF has undergone rapid restructuring and today owns and operates four vessels from its main office in Ålesund, Norway. “We have not been so affected by the downturn of the market this year,” Per explains. “At the moment we have 100 per cent contract coverage. Of course we are watching the market with great interest, and though there was an upswing this summer it remains to be seen the substance and whether this will continue into the future.”

He goes on to conclude that, though the market remains ambivalent, GEOFF remains confident in the future: “We are a small company that is currently pursuing a number of projects whilst monitoring the market to see how we can grow our fleet, though we aim to at least double it within the next five years. What direction and segments we head toward will be determined by our ongoing monitoring of the industry.”