Back to Profile Gallery > IOS InterMoor

IOS InterMoor is Norway’s leading distributor of mooring equipment and service to oil and other offshore industries.

The company offers complete solutions adapted to clients’ needs, with options for purchase or rental of equipment. Previously IOS Offshore, earlier this year IOS was acquired by the international offshore service provider Acteon and has been incorporated with InterMoor, another Acteon company.

David Smith, managing director of IOS InterMoor, elaborates on the reasons behind the acquisition: “IOS was previously owned by Norwegian company Norse Cutting & Abandonment, who we worked with for a number of years. However Norse C&A were unable to provide us with continued opportunities to develop the business further and coupled with the market conditions at the time, they felt it was the right time to sell the business. At the beginning of the year we gave a number of management presentations to prospective buyers and began the process of narrowing this down to a single buyer. The agreement was finalised at the end of June, with Acteon as the new owners of IOS.”

Although the acquisition only took place a few months ago, the process has gone smoothly as David comments: “There is always a transition period following a change like this, but we discovered that many of our current business practices are in line with Acteon’s so the whole process has been much easier. Following the acquisition the CEO of Acteon, Richard Higham, gave a presentation to our staff, which was a real confidence boost. There is always a level of apprehension about changes in strategies or goals, but as we discovered these are extremely similar to our own and actually being part of Acteon gives us a greater foundation to work from.”

Acteon already owns InterMoor, a globally recognised full service mooring company, which has maintained a Norwegian branch for the last two years. Tom Fulton, president of InterMoor, explains the benefits to the company following the acquisition: “In order for InterMoor in Norway to operate at the same level as the rest of the InterMoor brand we needed access to a greater range of equipment. This could have been via major capital investment or by acquiring an existing successful business, such as IOS. This move has been beneficial in a number of ways – we now have a greater inventory of quality equipment, which we can ship to sites all over the world. We also have a stronger position within the Norwegian market as the trend there is for Norwegian contractors and oil companies to use other Norwegian contacts, even for their international work.” 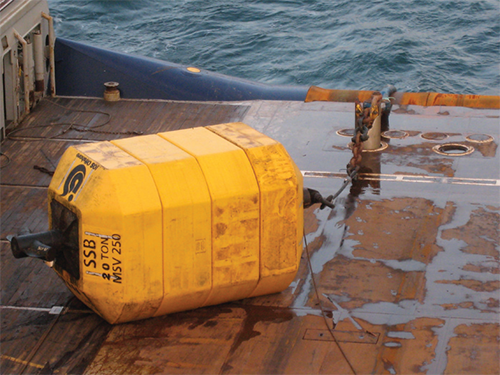 David continues: “InterMoor is a global business with operations in the UK, the US, Brazil and Singapore, amongst others. Having a global partner has already benefited IOS as we’ve begun to export equipment from Norway to regions such as Brazil, so we’re definitely seeing opportunities to expand into newer markets. There is no doubt that the Norwegian market is one of the most active markets within the industry and by acquiring IOS, Acteon has greater access to this lucrative area.”

IOS has a history spanning almost 25 years within the Norwegian market and a reputation to match. Being part of the Acteon group means IOS will now have the opportunity to import equipment and technology into Norway from Acteon’s other companies if required, as well as drawing on the greater experience of the group. David emphasises how IOS is already benefiting from this relationship: “We’ve tried to maintain our Norwegian identity with the IOS name, as well as to incorporate the InterMoor brand into our name, on a domestic level, but also to increase our global presence. Very recently we signed a global frame agreement with Statoil, a leading gas and oil supplier, which we have a long-standing local relationship with. This agreement shows that it identifies that IOS has taken the step into global distribution.”

The economic crisis has meant that a number of markets within the industry have suffered a decline as Tom highlights: “There are a couple of markets currently facing challenges such as the Gulf of Mexico and to a lesser extent the UK. In comparison the Norwegian market seems to be very stable and even expanding slightly. With the acquisition of IOS we have secured more work in this area which will help to stabilise the position of the group as a whole.”

David expands upon the state of the Norwegian market: “The number of semi-submersible rigs in operation today in Norway is at an all-time high, with expectations for this number to rise in the future. This is an area we have been focusing on for the last few years and developing unique concepts for working within the Norwegian sector. This includes pre-lay moorings, which allows clients to move rigs around in the short weather windows of the winter, rather than having the expense of idle rigs. In response to this growing demand I believe that there will be opportunities for IOS InterMoor to expand and possibly to secure new larger premises. Already Statoil has commissioned us for a new project in Canada at the beginning of next year, which is very positive.”

Looking ahead, IOS InterMoor is already a market leader within the mooring industry and with new strong relationships in place seems set to expand upon this position. Tom concludes: “Across all of our businesses we are looking at best practices in different areas and implementing these, where possible, into others. We want to add value to our clients’ projects by providing a complete solution service and to ensure that clients receive the same high class of service from us regardless of global position.”