Originally established under the name Bassdrill Ltd in 2007, Houston-based niche drilling firm Atlantica Tender Drilling Ltd has been part of a large rebranding effort to reflect the growing success of the company and its acquisition by private equity firm HitecVision.

Additionally, because Atlantica is the name of the ancient continent that once connected West Africa and Eastern South America, the name represents the company’s current core marketing area as well as its position as an expanding global provider of tender assist drilling vessels.

Formed to design, fabricate, market and operate safe and efficient drilling equipment in a highly competitive and heavily dominated market, the company is able to provide cost-effective solutions for the offshore drilling market as a result of its well-designed vessels, commitment to personnel safety and high quality equipment packages. Because of this focus on quality and innovation, the company has gained a strong reputation and witnessed demand for its services from oil majors across the globe. Discussing company operations, vice president of Atlantica Tender Drilling Mike Smith begins: “The offshore drilling business is dominated by jack-ups, drill ships and semi-submersibles. There are a far smaller number of tender drilling rigs. We use self-erecting tenders because we have a large crane and lift crane transportable drilling package from the deck of the rig onto the deck of the production facility. 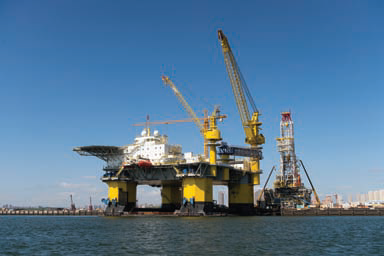 “The drilling package actually drills down through the deck of the production facility and completes the wells there with the accommodation, power, mud system, pipe racks and support utilities in our vessel, which is moored alongside and connected to the drilling package with umbilical hoses and electrical cables and so forth. That is the unique aspect of tender drilling as apposed to drilling with the main types of rigs like jack-ups, drill ships and semis.”

Since it was previously featured in European Oil & Gas Magazine under its previous name in June 2013, Atlantica Tender Drilling’s substantial growth trend has slowed down over the last 14 months due to a somewhat softer market. Despite this, the company is continuing to find opportunities in the tender drilling sector and is focusing on its contracts with oil majors Petrobras and Total.

Following an agreed two-year firm period extension of the present contract for the company’s Alpha vessel, which will commence at the conclusion of the present 12 well contract, Atlantica Tender Drilling was also awarded a contract from Total for a new build semi tender assist unit to be used on the Moho Nord development offshore The Republic of Congo in early 2013. The award follows an extended Compensated Call for Tender (CCFT), which the company entered in the first quarter of 2012 as part of a selected group of contenders that were asked to design a modular drilling package to be utilised on the tension leg platform for deployment in 2015. Following a now-concluded tender exercise, Atlantica Tender Drilling’s semi tender, ‘Delta’, is due for delivery in the second quarter of 2015 and will feature a range of unique features as required by Total for its long-term drilling programme, which is due to begin in the third quarter of 2015.

Discussing the company’s growing fleet, Mike says: “The Alpha is currently operating in West Africa. Barge type units are rectangular, barge-shaped and tend to work in South East Asia and West Africa because they aren’t suitable for more harsh environments. Meanwhile, the Beta is a semi-submersible rig that commenced its term contract with Petrobras in the Campos Basin, Brazil, in March 2014; this is the first time that tender drilling has been attempted in a reasonably harsh environment, but because there is constant motion in Brazilian waters the semi-submersible was chosen. Better motions means improved uptime and generally increased capabilities for customers.

“The Beta and Delta vessels are very similar and have the longest contracts, with an order of around four to five years for those two. However, Delta and Gamma are still under construction at Dalian Shipbuilding Industry Corporation (DSIC) in China. The Gamma is due for delivery in the first half of 2015 and Delta due in the summertime.

Beginning with two rigs capable of drilling past 6000 ft of water in 1996, to 40 by 2002 and approximately 150 in 2014, the ultra-deep water drilling fleet has witnessed dramatic growth over the last two decades. Atlantica believes the huge increase in deepwater wells drilled by this growing fleet will lead to a similar increase in deepwater production installations and therefore opportunities for tender drilling. Furthermore, with Seadrill selling to SapuraKencana, the company became the technology leaders of the niche tender sector, as Mike concludes: “We have two brand new semi tenders drilling on deepwater TLPs on the multi-billion dollar Moho Nord project and the Petrobras PapaTerra project. These are expensive, long-term, high profile projects, which is what we like about the deepwater semi tender business.

“Another benefit is that if we win a contract with an oil company that decided they are going to build a light weight, smaller TLP or Spar because it can be drilled with a tender, that means from then on it can only be drilled with a tender. They must commit to a tender drilling contract at the same time they commit to construction of their deepwater production facility, which allows us to order a new build with a drilling contract already in hand. These are the opportunities we will be looking for in the future.”