Covid-19 has been an unprecedented challenge to the oil market, eradicating demand, increasing stocks and testing commercial relationships throughout the supply chain. In this article, we consider how markets have fared during the pandemic before looking at some of the events that are likely to affect the crude oil market in the future.

Demand crashes, production ramps up
As governments worldwide scrambled to stem the tide of Covid-19 by imposing lockdowns in the early months of 2020, demand for crude oil collapsed. April 2020 saw an alarming 33 million b/d year on year contraction. The initial OPEC+ response was ill-co-ordinated at a time when immediate cuts to production were required to prevent oil prices from tumbling. A Saudi-Russian price war in March following the inability to agree cuts resulted in production from OPEC+ increasing by 1.6 mb/d to a 13-month high of 30.4 mb/d in April 2020, in turn leading to oil prices falling to below $30 per barrel. In the US, production also saw record highs in that month.

WTI dislocates and goes negative
The OPEC+ deal was not enough to prevent the historic collapse of WTI on 20 April 2020. On that day, the WTI May futures contract plunged as low as minus $40.32 p/b at its nadir. Despite WTI’s unprecedented fall into the red, Brent settled in the black at the price of $17.36 p/b. The spread between the two can be explained principally by two factors that drive WTI’s dislocation from Brent prices:
1) The WTI futures contract is physically settled. In other words, the participant holding an open long position must accept delivery of the oil. The May 2020 contract in question expired on 21 April 2020 (for physical deliveries to be made in the month of May). On the other hand, the Brent futures contract is a deliverable contract based on Exchange for Physical (EFP) delivery with an option to cash settle against the ICE Brent Index (i.e. against the value at which physical Brent is trading). This meant that WTI market participants, including hedge funds, market speculators and other investors, were suddenly confronted with having to pay to offload the contract or accepting delivery and seeking storage, while Brent buyers had the option to cash settle instead of taking delivery. 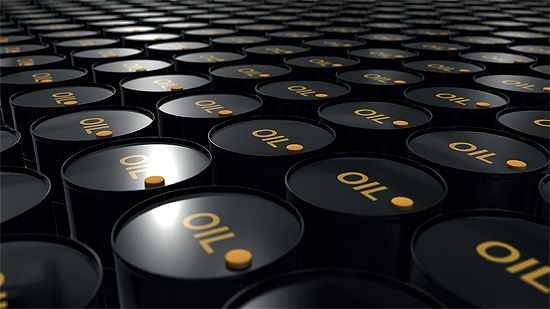 2) WTI is priced according to one location: Cushing, Oklahoma. The benchmark is reliant on the network of pipelines into Cushing to maintain the flow of crude, and importantly inflowing oil is without access to shipping or floating storage until it reaches the US Gulf Coast. WTI has access to 76 million barrels’ storage capacity at Cushing, which became fully leased in April owing to the sharp drop in demand and increased production leading to extreme oversupply. By contrast, Brent is a waterborne crude, meaning that it theoretically has access to the storage capacity of all the shore tanks in North West Europe and, significantly, the global fleet with capacity of approximately 2.2 billion barrels.

Floating storage –a safe harbour for traders?
Once the contango between physical/spot prices and forward/future prices has sufficiently widened to cover the cost of storage, traders start to become incentivised to buy the crude, store it and sell it later. Cheaper onshore tanks (in the case of waterborne crudes) tend to be the preferred option, but more expensive floating storage may be used, provided that the contango is deep enough to cover the daily freight rate.

Described as the maritime contango “marriage of convenience”, oil traders looking to store their oil and shipowners looking for a cheap way of deploying their vessels make for suitable partners in times when the oil and freight markets are in downturn. However, as demand for floating storage increases, so too do freight rates. On 22 April freight rates for Very Large Crude Carriers (VLCCs) climbed as high as $222,000 per day, before dropping after the recovery of WTI and Brent to $72,000 per day on 4 May. Sharp increases in freight rates are likely to have contributed to a few disputes due to difficulties for FOB buyers in procuring tonnage. Recent English court decisions may open the way for vessel owners under voyage charters used as storage to claim losses in excess of demurrage rates for delay. In October there were reports of oil traders anticipating further oil price slumps, leading some to increase chartering activities.

Using floating storage in the manner described above is not without legal and operational risk for sellers and buyers of crude oil:
1) Title – in 2001 in the case of Glencore International AG v Metro Trading International Inc (No.2), we saw the legal outcome of the collapse of an oil products floating storage/trading entity in Fujairah. MTI’s collapse gave rise to 50 different claimants commencing 35 separate actions disputing title over delivered, purchased or financed oil which had (at times wrongfully) been comingled, blended and on sold. In that case, English conflict of law rules determined that the law governing transfer of title to oil was to be governed by the law of Fujairah rather than by choice of law provisions in individual contracts. 2) Anchorage – Crude owners will need to be aware of the risks to cargo in certain locations if near a busy port, areas susceptible to piracy or subject to increased weather risks when evaluating whether to use floating storage.
3) Cargo owner’s liability – Older tankers are at an increased risk of spilling oil, which could lead to potential liability for traders who own the oil spilled in certain jurisdictions, including the US. In this scenario, issues such as whether the relevant storage facility qualifies for limitation under liability conventions may arise, and traders may consider having insurance to cover costs in the event of an oil spill.
4) Deterioration of the crude – The quality of the oil itself may also deteriorate if kept in floating storage for extended periods. If the hydrocarbons separate, a ‘sludge’ could form at the bottom of the storage tank, alongside evaporation of the oil.

Negative prices
The market shock at WTI’s negative prices has inevitably led to parties introducing negative price clauses to protect sellers from the obligation to pay buyers for delivery. ExxonMobil, amongst others, has reportedly introduced such clauses along the following lines: “If the purchase price to be paid by Buyer to Seller for any crude oil delivered is less than zero dollars, such purchase price shall be deemed to be zero dollars”.

Where agreements had price mechanisms tied to WTI but were silent where the pricing turns negative, such clauses do not appear to have yet been considered by the courts. However, in The State of the Netherlands v Deutsche Bank AG (2019), the Court of Appeal held that an annex to an ISDA Master Agreement did not contemplate the payment of negative interest. Nevertheless, for oil sale contracts these issues will be matters for interpretation of the agreements in each case.

For now, we are likely to see the adoption of negative price clauses into sale contracts not just for WTI linked deals but also for the wider Brent market. This is despite the fact that the prospect of negative Brent prices is currently regarded as remote.

Force majeure
The ability of buyers and sellers to rely upon Covid-19 as a force majeure (FM) event has been the subject of much discussion. At the height of lockdown, companies engaged in the oil market, both upstream and downstream, as well as traders, have sought relief from their contractual obligations via the FM provisions of their contracts. Such companies include CNOOC (China’s largest LNG importer), Libya’s National Oil Corp., and US shale producers.

Under English law, there is no common law doctrine of force majeure and therefore, the wording of the FM provision will be essential in determining whether it can be relied upon.

Normally FM provisions will list certain specific events with the potential to trigger FM as well as catch-all provisions focussing on events beyond the reasonable control of the defaulting party. It is not uncommon for FM provisions to explicitly refer to pandemics as an FM event, and frequently government-imposed restrictions related to Covid-19 can trigger FM events.

Once an FM event is established, the defaulting party must demonstrate that there was a causal link between the FM event and failure to perform. The nature of the causal link will normally involve a search for an effective cause but will depend on the wording of the contract. The case of Classic Maritime Inc v Limbungan Makmur (2019) found that the words “resulting from” and “directly affect the performance of either party” imported a causation requirement such that the defaulting party must demonstrate that it would have performed its obligations but for the FM event.

Parties will now be looking closely at their ability to rely upon FM should the events of 2020 repeat themselves. FM provisions which require non-foreseeability may have an advantage for the performing party in the case of future outbreaks impacting sales. Caution must be taken by parties where amendments to FM provisions are being discussed. If an upstream seller seeks to amend its FM provisions, it will be important that such FM provisions can be relied upon downstream throughout the chain.

Other drivers of change in 2020
The oil market of 2020 and beyond may also be affected through changes to the availability of trade finance and lack of long-term investment.

The recent collapse of Singapore oil traders Hin Leong and Zenrock has highlighted the risks to trade finance providers. Allegations of fraud in relation to double (and multiple) pledging, have left billions of dollars being owed to trade finance lenders. In the case of Hin Leong alone, banks are reportedly owed an estimated $3.5 billion.

European banks such as ABN Amro and BNP Paribas are reported to have already decreased their involvement in trade finance due to increased regulation under Basel IV. The risks of fraud in trade finance transactions, as illustrated by the Hin Leong and Zenrock scandals, have only added to increased caution by banks. Some of these investment gaps had been filled by private equity, but with the recent pandemic causing some funds to file for bankruptcy, there has been a decrease in fundraising in the oil sector. These changes may lead to a lack of liquidity and less diversification and interruption in the oil markets as marginal producers and smaller traders struggle to obtain finance.

The creation of a central registry for cargo in Singapore to improve transparency and an increased use of electronic bills of lading and blockchain have been suggested as answers to improve security in trade finance and eliminate problems with paper-based administration. However, market acceptance of using a blockchain system beyond trials and proofs of concept still has some way to go.

Longer term, the pace of energy transition has quickened with major oil companies and traders signalling an intention to invest more heavily in renewable energy. Drivers were already in place with global measures for decarbonising industry and initiatives such as the requirement for low sulphur fuel under IMO 2020. However, the Covid-19 experience has been used by many governments as a reset moment to produce policies for increased investment into renewables. Just as the oil revolution created winners and losers, so too will the energy transition, and as a result, we may see more insolvencies in the oil industry. Conclusion

Though oil markets have regained a semblance of balance after the turmoil of early 2020 and have been buoyed lately by the news of vaccines against COVID-19 emerging, the recovery will be far from linear and the seeds of some disputes have already been sown. Producers, traders and other market participants will be reviewing their arrangements to prepare for the volatility of the months ahead.