Initially created as a vehicle to develop Danish energy activities, the company has expanded significantly through organic growth and acquisitions both in Denmark and across Europe. Over the past 12 months DONG Energy has led the development of the Hejre field in the Danish sector of the North Sea. The field, which is DONG Energy’s first High Pressure – High Temperature (HPHT) expansion, is expected to start production in 2017.

Commenting on the progress of the project, Flemming Horn Nielson, senior vice president says: “We have successfully installed the jacket and started on the first out of five production wells. The topside is under fabrication by Daewoo in Korea and we have manufactured and installed both the gas and oil pipelines for the platform. The big focus and challenge at the moment is on drilling these wells on time and on budget with a great focus on the construction and finalisation of our topside,” he adds. By the conclusion of 2013, the Merchant Banking Division of Goldman Sachs and two other pension fund investors, ATP and PFA made a heavy investment in the company, reducing the state’s ownership to 57 per cent. “Today we have a much bigger chunk of private investors in the company and an exciting future ahead,” highlights Flemming. The parties agree to seek an initial public offering (IPO) of DONG Energy by 2018 at the latest and as such the Hejre project plays an important role.

The large scale of the project poses several engineering and manufacturing challenges, and in the company’s half year report, released in August 2014, it highlighted design related challenges of the topside with knock on effects to the manufacturing, isolation, hook up and commissioning work. “Overall, the project is going well with great expectations for the future although we have the challenges with the topsides. This is a key project, not just for exploration and production but for the whole company,” says Flemming.

National predictions highlight a significant increase in oil production when Hejre enters the production phase as Flemming points out: “With approximately 40,000 barrels a day, the project has a big impact on the self-supply of oil for Denmark and will prolong it for several years. Since the mid 1980’s Denmark has been self-supplying its oil and gas. However, there has been a down-going trend since 2003 but the boost from the Hejre project certainly helps that curve improve for the future.

“We have ongoing operations in the area around the Siri field, and with Hejre our presence in Esbjerg will be reinforced from which we can run our operations more efficiently. Essentially, our whole daily operations will be given more of a lift and as a company we can do more with competences and synergies and so on, so it is a really good add on to our existing business.”

Ensuring that key competences exist within the traditional positions is vital to the success of the business in all areas, understanding both old and new reservoirs. “We also look closely at 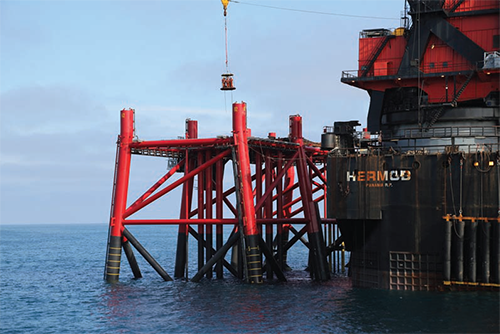 the technology side, but the most important part is how you project manage the developments on time and to budget, ensuring you achieve the quality expected. How to execute projects on time and on budget and orchestrating this for the future is a huge topic for the oil companies,” Flemming explains.

The company has a very strong focus on the development of wind energy, and despite some initial concerns from external parties that the strategy may change following the private investment, it has been made clear that the investors have bought into a strategy that has a heavy footprint on the development on wind energy with approximately half of the investments in DONG Energy going into wind turbines. “Wind energy has a strong future and we believe in bringing down the price of energy. The other big chunk of investment, closely following wind investments will be going into exploration and production.

“Additionally we will be doing a lot of work on our existing traditional thermal power plants, where on a broad scale we are converting coal and gas fired plants to plants using biomass. As a whole company we have targeted our carbon emissions, significantly reducing the amount per energy produced,” explains Flemming. Recognised amongst the best in Europe in the transformation of the electricity and heat production, the company has set itself an ambitious target of reducing the CO2 emission per produced kWh by 60 per cent in 2020 compared to figures of 2006 and is well on its way to achieving it.

Within the business is a strong team of employees that has been involved in the design of power plants from the original coal source to today’s biomass solution. “The team has been undertaking extensive R&D work, focusing on topics such as addressing the aggressive corroding products released when hay is burned as a fuel source, but also ensuring that products can be more easily sourced and of a high quality. The transformation over the last seven years has been particularly impressive,” says Flemming.

In 2013, a government deal with supporting parties agreed a new national oil strategy aimed at the oil and gas industry, working towards ensuring exploration and research of smaller assets in minor fields and getting the most out of production. DONG Energy reached a major milestone in 2014 having been dealing with fatigue crack issues on structures in the Siri field and in July 2014 installed new stabiliser legs securing the life of the platform and surrounding satellites. “We have also progressed on the Solsort discovery following the successful drilling that proved the presence of hydrocarbons in both the eastern and western parts of the region. Together with our partners we are focused on the next stages, deciding on the concepts and expecting to reach some final strategic decisions in 2015.

“As we move forward, the focus in Denmark for the business is two-fold. Firstly, driving forward and executing the ongoing projects in Hejre, Solsort, and Siri, are ensuring the growth. In Demark we will significantly increase the production when Hejre starts producing, and delivering projects on time and on budget is a huge focus area but the other target goes beyond 2020 and sustaining production. We are currently at the seventh licensing round, so it is important that we focus on being successful with this to continue in line with the strategy,” concludes Flemming.