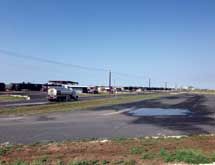 When Hondo Railway six years ago moved from San Antonio to a new location 30 miles away in Hondo, Texas, the company assumed it would be providing the same services in its new home. For the previous 24 years, it had operated a transloading facility in San Antonio to handle food-grade sweetener. At its outset, the new facility continued serving this market as its main customer base.

“I was put in charge of finding a new spot for our company,” COO Miles Lee says. “We found Hondo. It was a cotton field beside the track that BNSF and UP had access to. We had to do our own switching and decided to build our own railroad to handle the traffic coming from these two big railroads. We put down initially 13,000 feet of track to serve food-grade transload. Shortly after we got going, that’s when the Eagle Ford Shale came about and we started getting new opportunities to transload for Eagle Ford.”

Growing, Growing, Grown
The initial 13,000 feet of track has grown to 100,000 feet and instead of moving 2,000 cars a year, Hondo Railway now moves 15,000. It increased switch days from five days to six or seven days depending on the week’s demand. It doubled its full-time rail employees and grew from 25 employees to 125 employees for the whole company. It also purchased new equipment including oil skids to meter oil off the trucks and onto rail cars, and belt conveyors to load frac sand. Then, to handle the inventory of all of its products, it expanded its database system.

“It’s definitely a different landscape out here,” Lee says. “After putting down our initial track, we came up with a masterplan that would serve as our 20-year growth plan.

“We detailed where to put down track and how to grow,” he continues. “Once Eagle Ford started up, we started putting down track for the next three years and didn’t stop. We completed one project, kept the crew here and went to the next project. In three-and-a-half years, we’ve completed our 20-year growth plan.”

After this rapid expansion, Lee says the company will continue to grow but at a more steady pace. Now that it has increased its acreage from 25 to 175 acres, Lee says the company has given itself room to grow. It also has the infrastructure in place to quickly absorb increased demand should another boom hit in an unsuspecting town nearby.

“I think one thing that draws people to us is the accessibility and interchange with two class 1 railroads,” Lee says. “We also have an ease to build. We have 175 acres – all flat. It’s clear, the utilities are in place, the roads are paved and so the start-up time once we decide to build is pretty short compared to other locations where it takes longer to clear land and get utilities brought in. I would say we have a head start on getting new operations going.”

Now, the city of Hondo itself is partnering with Hondo Railway based on the company’s track record. The company formed a rail agreement to provide rail service for the city’s business park under development.

“We’re working with the city of Hondo on their own property that adjoins ours,” Lee says. “They are in the process of developing a business park and we are going to be the rail provider, so we will be expanding service into other areas and provide rail to future customers they bring in.”