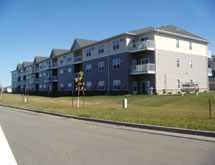 As oil and gas extraction continues to boom in North Dakota’s shale plays, oil and gas players aren’t the only companies to benefit. In fact, trickle-down from the industries’ robust expenditures has boosted the state’s economy, with the construction sector taking a big bite out of this oil pie.

Meridian Commercial Construction (MCC) is one such North Dakotan company taking advantage of the benefits of the oil boom. According to Project Manager Matt Both, nary a competitor can compare with the breadth of experience MCC boasts. The company has delivered 1,000 apartment units in Fargo, N.D., alone, and MCC currently is building 10 projects throughout the state.

“There are a lot of contractors trying to get into apartments out there, but they can’t match our experience for doing it,” Both says.

“We have at least the sheer volume of apartments we have completed out there right now, and we have 10 more under construction,” he adds.

MCC has the capabilities to design, build and deliver commercial, retail, tenant improvement and multifamily projects per customer specifications. The company says its goal is to make construction simple for clients, performing design, zoning, permitting, construction delivery and other tasks for them.

“We are a full-service construction company,” MCC says. “We also pride ourselves in involving our clients in every aspect of the construction process from beginning to end in a very transparent manner.

Although there are tons of projects for the taking throughout the state, MCC struggles to fill its labor and material needs because of the competition from oil producers. Both says his company must pay its laborers more than market rate so they are not lured away.

“We just have to compete with our wages and pay our guys more so they won’t leave for the oil fields,” Both says. “We count on subcontracts much more, and they self-perform more than they did in the past. It’s just tough competing.”

As for materials, Both says everything related to construction costs more across the board these days. Even if certain materials or items cost the same, for instance, trucking costs have risen significantly, as well.

One segment of work that is particularly expensive is utilities, which MCC has taken to installing itself to make sure its developments are in proper working order.

“We’re building them when [utilities are] not there, so we have to build them ourselves,” Both explains. “We’ve expanded our scope of work to become more of a development company to build these apartments.”

Ongoing Growth
With at least 15 people operating in MCC’s western North Dakota region – primarily in a supervisory role – Both says the company intends to continue growing in this part of the state as the market dictates.