At 1224 kilometres, Nord Stream is one of the world’s longest offshore pipelines. When inaugurated in 2012, the natural gas pipeline running from Vyborg (Russia) to Greifswald (Germany) had an annual capacity of 55 billion cubic metres. Almost seven years later, the project for doubling this capacity by adding two more pipelines is nearing completion. The Nord Stream 2 project is expected to secure the long-term supply of natural gas from Russia into Western Europe and, according to estimates, the pipeline will transport enough gas to supply no less than 26 million households.

Paul Corcoran, Chief Financial Officer of the project developer Nord Stream 2 AG, discusses the major economic and social positives brought about by the development: “There are three benefits 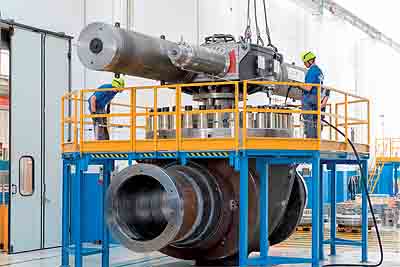 that stand out: economic stimulus, security of gas supply, and consumer benefits from enhanced competition,” he points out. “It has been calculated that our €8 billion private investment has created 30,000 jobs in Europe as 670 companies from 25 countries have been working on the project.

“Moreover, at a time when Europe’s indigenous gas production is declining even faster than expected, Nord Stream 2 will give gas buyers secure direct access to the world’s largest natural gas reserves in Russia. Finally, consumers will benefit in terms of prices and energy security from the competition between Russian gas and LNG to meet the demand for increased gas imports.”

Floating factories
He goes on to analyse the effects that Nord Stream 2’s operation will exert on the European gas market: “The key development in the market over the last decade has been the greater integration of the EU internal market for gas as witnessed by its regulations and investment in interconnectors. Although this integration still needs to be completed, gas from any external supplier can, by and large, be sold to anywhere in the EU internal market at prices determined by the market. The gas supply through Nord Stream 2 should further stimulate competition. Also, the greater integration will ensure that the gas arriving through Nord Stream 2 at the German Baltic Sea coast will not just be for Germany, but for the EU.”

At this point in time, over 800 kilometres of the pipeline have been laid by four different lay barges with over 1000 people working on 30 vessels in the Baltic Sea on various aspects of the construction. Pipelaying vessels act as true floating factories, welding and testing pipe sections before joining them onto the main pipe string. It is through the perfection of their operation that the 24-hour production schedule is being maintained and the rate of up to three kilometres of pipeline laid per day is being kept.

“We received the required construction permits from four of the five countries through whose waters the pipeline will pass – Germany, Finland, Sweden, and Russia, long ago. Denmark still has not decided which route the pipeline will take, but, all in all, the project is on track for completion by the end of 2019, as planned,” Paul reveals.

“We have benefitted from some of the engineering and project management solutions developed by the first Nord Stream project in this one,” he moves on to highlight a few technical aspects surrounding the development. “For example, we have made sure that the gas can flow all 1200 kilometres through the Baltic Sea, from Russia to Germany, without the need for interim compression. Essentially, this is achieved by very high pressure at entry and the extremely strong pipelines being constructed in three sections with different wall thicknesses. The lack of interim compressor stations simplifies construction and leads to a more reliable system. Of course, there are also environmental benefits and savings on fuel gas.

“The main technical challenge for us has been the sheer complexity of the project and getting all the moving parts working in sync,” Paul adds. “External factors like environmental considerations, extreme weather conditions, and the allowed working periods included in the permits have also had to be taken into account. In order to deal with such complexities, we had to build resilience into the project management and constantly evaluate and mitigate risk.”

Establishing effective logistics practices has also helped immensely with the smooth implementation of the project. Paul details: “Our logistics concept is based on the operation of four hubs in ports round the Baltic Sea, with the end objective of the pipe-laying vessels being supplied 24/7 from the closest hub. All the 200,000 steel pipes were made in Germany and Russia, then transferred to Mukran (Germany) or Kotka (Finland) to be concrete weight coated and were then either stored there or transferred to Hanko Koverhar (Finland) or Karlshamn (Sweden).” 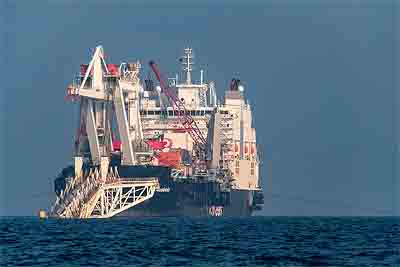 Extensive analysis
In recognition of the need to ensure safety and environmental protection during the Nord Stream 2 project, various measures have been built into all processes, including route selection, material purchases, and all aspects of construction. “The findings of our very detailed environmental impact assessments feature in the construction permits granted to the project by the authorities of the countries through whose waters the pipeline will pass. Underpinning all this has been an investment of over €100 million in extensive surveys of the seabed, which has been a key driver not only of our route planning, but also of the seabed preparation works, and the construction of the pipeline itself. In addition, survey vessels even accompany the pipe-laying vessels to ensure that the pipeline is laid precisely where planned,” Paul explains.

Reiterating the strong legal foundations on which the Nord Stream 2 project is built, he concludes by dispelling the doubts cast by certain quarters over the legitimacy of the development. “Our pipeline is financed by six major energy companies who recognise the strategic value of such infrastructure for Europe’s long-term energy security. Before taking the final investment decision, an exhaustive analysis was made of all applicable laws, regulations, and international conventions, and it is on this basis that the project has been proceeding. Nord Stream 2 is progressing according to schedule and according to the laws in all the countries through which the pipeline passes, and even some of our most vigorous opponents now understand that the project will be completed.”