Founded on the principles of a family business by the Klepsvik and Okland families, North Sea Shipping (NSS) participated in the fast development in ocean going fishing vessels throughout the 1950s and operated in the fish farming industry in the 1970s.

Having developed a reputation for innovation, the company saw an opportunity to expand within the booming Norwegian offshore industry and began focusing on the management of remotely operated vehicles (ROV), inspection, repair and maintenance (IRM), and cable and seismic vessels in 1980.

Over the years, NSS has been involved in the development of groundbreaking vessels such as the North Sea Surveyor in 1983, which was the world’s first ROV and survey vessel to track ROVs acoustically. Later, in 1997, NSS worked with Stolt Comex on the first purpose-built IMR boat, the MV Seaway Kingfisher. Today NSS group, and related companies, is involved in nine different vessels. Three of them are 100 per cent owned and the others are together with partners. NSS has an international client base; this includes major firms such as ElectroMagnetic GeoServices (EMGS), Technip and Global Marine.

Providing a wide range of services based around vessel ownership and the operations of its fleet, as well as the management of the vessels of other owners, NSS operates all vessels according to the modern ISM code, with a focus on experience and quality seamanship. All operations the shipping firm is involved in are in accordance with the Total Safety Management Concept. This applies a variety of quality controls, in which its quality assurance system run in UNISEA marine software (based on ISO 9001/14001) has a central role.

The company’s most recent contract was in June 2013 with EMGS, which extended the charter hire period for the Atlantic Guardian vessel from 1st September 2013 to 1st March 2014. Moreover, EMGS agreed to charter the vessel for a further period of at least two years, with the option of three one-year extensions. Under the agreement terms, NSS will conduct upgrades on the vessel to provide vastly improved fuel efficiency and station-keeping capabilities, which is anticipated to be completed throughout a five-week yard stay in 2014. Modifications will also be made on the vessel for EMGS’s state-of-the-art equipment. 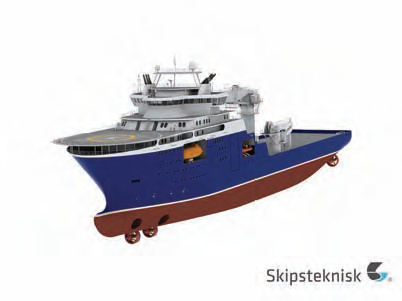 Well established as an innovative shipping company with industry expertise, NSS was awarded a long-term charter contract with Technip in July 2012 for a new build offshore construction vessel, the North Sea Atlantic. Designated ST-261 CD, the multipurpose offshore construction vessel, with a length of 142 metres and width of 27 metres, was specially designed by Skipsteknisk for operation under harsh weather conditions, along with high maneuverability and station keeping capabilities. The vessel’s specification meets the most stringent requirements for global deepwater subsea operations and it will be outfitted and prepared for duties such as pipelaying/cablelaying from carousels with VLS through moonpool or over stern, ROV operations, crane operations for bottom positioning of modules, and subsea installation works though moonpool and over shipside.

Features on the North Sea Atlantic include a power generating plant, with four diesel generators, one harbour generator and one emergency generator, tank capacities of 2100 cubic metres for fuel oil, two passive anti-rolling tanks, a semi-active anti-roll system and an anti-heeling tank system for crane operations. The large advanced offshore construction vessel also has two main Azimuth propellers, 4500 kilowatts each, two electric driven tunnel thrusters in bow, each 2200 kilowatts, and two retractable Azimuth thrusters in bow, each 2000 kilowatts. On deck it will be equipped with a 550 tonne active heave compensation (AHC) crane as well as a 50 tonne AHC crane and will have capacity to accommodate 120 persons on board (pob). Bergen Group BMV AS will construct the vessel in the Norwegian city of Bergen for delivery in the second quarter of 2014, before it is chartered to Technip for a period of five to seven years with a five-year optional extension and the further option of purchasing the vessel.

The cutting-edge new build is certain to further cement the excellent reputation NSS has developed since its inception more than 60 years ago and will complement the company’s ultra-modern ‘vessel for the future’, North Sea Giant, which was launched in 2011 and is also contracted to Technip Norge until the final quarter of 2015. One of the most advanced vessels built in recent years, according to SPS rules in 2010/2011, the North Sea Giant is capable of different activities, such as well intervention, subsea construction and drilling. Due to its low Loss concept diesel electric system, the vessel has extremely high redundancy; it also boasts a complete diesel electric power plant, which offers fuel savings, has a high load capacity on deck, thanks to its overall length of 160.9 metres and breadth of 30 metres, and two AHC cranes, one of which has a high crane capacity of 400 tonnes, with 3000 metres of wire for deepwater operations.

Developing a total power of 28,000 bhp, North Sea Giant has a total bollard pull of approximately 200 tonnes and, through utilising the Voith Schneiber propellers, has an extremely fast maneuvering response and active stabilising system. Another strength of the vessel the unique design of its six engines and six propellers, which are fitted in three sets of two; this design ensures North Sea Giant can continue operating at dynamic positioning (DP) class III if one side of the vessel is lost due to fire, water damage or total engine breakdown in one of the three engine rooms. Following the launch of North Sea Giant in 2011, the vessel was awarded the prestigious Offshore Support Journal Ship of the Year 2012 award in February 2012 for its innovative and advanced features; the award was given to the designers of the vessels, Sawicon, and builders, Metalships and Docks.

Having developed an excellent reputation and an impressive fleet, the future looks positive for NSS as it prepares for the launch of the North Sea Atlantic in late 2013 and continues to lead the way in the offshore industry for innovative vessels and offering first class construction services.