The PressureFab Group, founded only four and a half years ago, has already grown and developed into a leading designer and manufacturer of specialist offshore containers and subsea equipment.

Operating from its 11,000m2 facility in Dundee, Scotland, the privately owned company is recognised by the oil and gas industry for its exceptional quality and superior customer service.

As Hermann Twickler, company founder and managing director explained, its customers are both local and global: “We do a lot of work for smaller companies, but we also work with world leaders, including, National Oilwell Varco, Honeywell International and Halliburton, among many others,” he said. “As a team, we have a very impressive portfolio, and we are one of the largest manufacturers of containers and containerised equipment in Scotland. Basically our customers are looking for quality solutions and products that arrive on time and on budget and that is what we provide.”

Hermann explained that the company’s philosophy was borne out of thinking from the customer’s perspective: “When I established this company, I based it on what I believed a supplier should offer to blue-chip clients and to me those areas of top quality, reliable delivery and adhering to budget were paramount.” 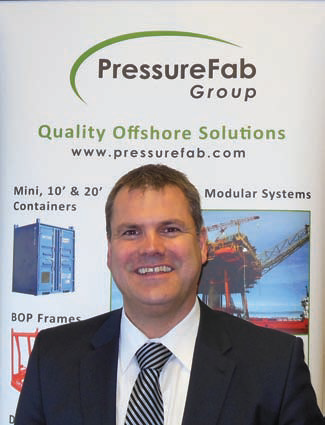 He started the company following a career working for large shipbuilding corporations. “I always wanted my own business,” he said, “so when the company I was working for went through a large buyout, I decided it was time for me to look for other opportunities, and I chose to go into bespoke steel fabrication. I established PressureFab in 2009 from scratch, with the intention of growing it from a small business into a sizeable concern. So we started with three employees and now have over 100, and have developed a very strong team.”

Hermann may sound modest when describing how he founded the company but it mustn’t be forgotten that just months into its inception a major recession hit Europe and much of the world. However, he steered PressureFab through the challenges and in acknowledgement of his achievements he was crowned Scottish Emerging Entrepreneur of the Year in 2012. “As this award is for personal entrepreneurship I felt really proud and honoured to receive it,” he said. “It recognised the risks and the hard work involved with forming a business from scratch in a recession, and to me winning it was very special.”

When Hermann founded PressureFab it was without a single customer, but now he is pleased to draw attention to the two largest contracts it is currently working on, which together are valued at well over £2 million and highlight how far the company has come. “One of these is the HESS Project through National Oilwell Varco, where we are supplying a complete solids and fluid management control system. This consists of the oil tanks, mud tanks, fluid and mud lines, all the suction equipment and pumps.

“What made this project unique was that usually pumps and tanks are connected using flexible pipes or hoses, but in this case, because it is to be run for two years in the North Sea, HESS insisted on having it all hard piped. As a result we constructed the entire unit, we got everything into position, and then connected all the skids and tanks with each other using steel pipe and set it up exactly how it is going to be on the oil rig, and then we have operated it here for a week as trial run to make sure everything is functioning as it should. It is due to be delivered in July to Denmark, has been through its final full function test, and just needs a few modifications, painting and wrapping before shipment.”

He added: “We are also finishing a mud cutting processing plant, for which we have built all the tanks, the pipes and the mud cutting skips, for National Oilwell Varco’s Environmental Division, and when it is complete it will be represent about £1.5 million worth of equipment.”

It is clear that PressureFab is maintaining its growth trajectory, but Hermann is determined not to chase expansion at the risk of losing quality or job security for his team. He summed up the plans he has for the future: “Going forward I think we will diversify a little more, as the expertise we have in oil and gas can be applied to the renewable sector as well, and that is an area I am looking forward to getting more involved with. We have already provided equipment to the Orkney Islands and Shetlands for the EMAC project and so I am keen to look into what renewable customers might want to fit into a containerised unit, rather than wait for them to tell us. I prefer to offer a solution rather than waiting to be asked.”

He concluded: “I believe we are in a good position – customers are looking for a supplier that has capacity and resources available and they can see we are innovative, we hit our deadlines, and meet our budgets. We also have ideas, and that overall package is what our clients really appreciate.”