Back in 2014, activity in the Marcellus/Utica Shale Basin was booming, however, the market was almost exclusively occupied by small local businesses and large corporations, which for the most were not local. Experienced services executive Bill Johnson recognized this, and could see the potential rewards for someone who could establish a midsize, regional business, capable of supporting production and midstream activities in the area. Through a partnership with Virginia-based private equity firm Turning Basin Capital, Bill set out to turn this vision into a reality. It was in this way that, after a series of acquisitions and mergers, ShalePro Energy Services came to be.

Six years later, in 2020, ShalePro is one of America’s fastest growing private companies. The firm has over 300 employees and has already been named on the Inc. 5000 list four times. Ultimately, 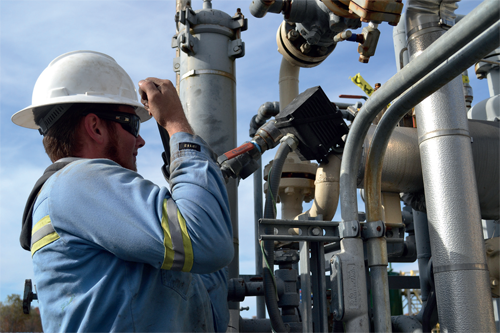 Bill, ShalePro’s CEO, suggests that the business has become what it set out to be – a very sizeable regional player in the Marcellus/Utica region.

“A lot of the success we have achieved goes back to our original thesis,” Bill explains. “The smaller businesses in this market just don’t have the scale and talent pool we have, or they don’t have the resources to invest in the talent pool we have. We’ve really taken the model of those smaller businesses to the next level by bringing in professional expertise in almost every facet of the business not only the technical and operational areas, but also the back office and support staff too – which has allowed us to grow, and we have the capital to invest and support that growth.

“When it comes to what sets our work apart though, it is all about the quality of the services we provide every day to our clients,” he adds. “Again, it goes back to the people we have been able to hire, attract, and retain in the business. We have been willing to make the kind of investment necessary to go and get those people and it has really paid off.”

Predominantly, ShalePro is split between Operations and Maintenance work, and a Construction and Projects side of the business. With regards to the former, the company performs a wide variety of operations and maintenance services for both production and midstream clients, including well tending, compressor operations, pipeline maintenance and pigging services. The latter, ShalePro’s Construction and Projects arm, covers well hook-up work, mechanical construction, welding in a 33,000-square foot fabrication shop, as well as a selection of above ground piping, valve configuration, compression and midstream gas processing facility infrastructure work.

Four key areas
Referring to a project the company took on earlier this year, Bill describes how the full breadth of ShalePro’s services looks in action. “The work in question was for an exploration and production company in the process of buying new assets in the Marcellus dry gas area, up in northeastern Pennsylvania,” Bill says. “We actually made a strategic investment with them as part of the purchase of those assets, and in exchange for that strategic investment, we have become their services provider, which means that we are not only providing midstream and production related services, but we are also operating and maintaining all the assets over a long-term contract period. If we didn’t have such a broad range of services to offer, we really could not have pulled that deal together, but thanks to the way we are set up, we can step in and take care of all their operations.”

In addition to its core offerings, ShalePro possesses an Instrumentation and Electrical Services division, and most recently, the firm launched a renewables group to serve natural gas power projects, biogas, and landfill gas clients. Introduced in the latter half of 2020, the new Services division is comprised of four key areas:

The first area focuses on traditional, natural-gas-fired powerplants. Due to the proliferation of such sites across the Marcellus/Utica Shale Basin, and how clean natural gas is compared to coal, ShalePro aims to provide the fuel gas infrastructure work necessary for the running of these plants.

“We wouldn’t be building the powerplants,” Bill states, “but we would be transporting the gas and taking care of the natural gas infrastructure. That is one component of the new division.”

The second component is in the area of landfill gas, a fuel generated and captured as waste products in a landfill breakdown. ShalePro plans to provide the natural gas infrastructure to process landfill gas, filter it, compress it, and then find a way to transport it to a point of sale, either via midstream pipeline or by road.

“The third area we’re looking at,” Bill continues, “would be in biogas. Biogas tends to be animal waste, but it can be captured from food waste too, and our job would be the same as with landfill: collecting the gas, filtering it, getting it to pipeline quality, compressing it, and figuring out how to get that gas to market.”

The fourth and final component in the new Power Generation Services arm is what Bill calls ‘behind the meter’ – electrical generation using natural gas. Targeted at big industrial customers in regions with easy access to large amounts of natural gas, ShalePro aims to provide such sites with their own natural gas powerplant, allowing facilities to use natural gas as a power source, and thus negating the need to buy electricity from a utility company.

“A lot of our clients in the renewables area tend to be developers, so they don’t often know a lot about gas infrastructure like our traditional clients do,” Bill remarks. “These customers rely on a company like us because they don’t have that vital in-house expertise.

“For us, the transition to renewables has been easy. In all four of the areas we’ve discussed, we draw on our experience with traditional exploration and production and midstream companies, and apply it, on a smaller scale, to these niche markets.”

The Power Generation Services division is now operational and its launch is an example of how ShalePro has adapted its focus in 2020, a year which has seen a downturn in the oil and gas market, as well as all the trials and tribulations of the Covid-19 pandemic. Though low commodity prices may have stifled production this year, ShalePro has remained flexible throughout, concentrating instead on investing in and expanding its service offering in preparation for the recovery of the market in 2021 and beyond. Alongside the renewables service, next year’s customers will also be able to take advantage of ShalePro’s new helical pile installation services.

“HelicalPro, as we call it, is another division we have added this year,” Bill reports. “A lot of our projects in the natural gas sector are now using helical piles as foundations instead of their traditional dug concrete counterparts. If, for example, you are setting a compressor in winter time when it is very difficult to deal with concrete curing and pouring in the cold, you can now go and 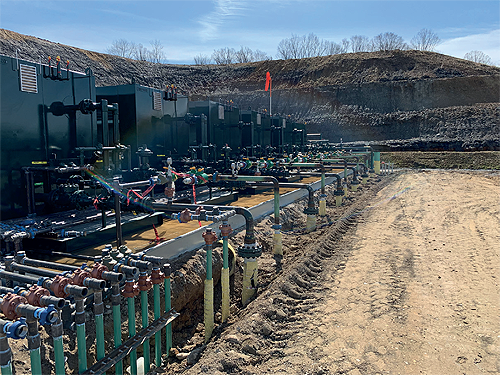 drive these helical piles into the ground in any weather conditions and use that as your base foundation. The same goes for piping racks, supports, and basically any above ground structural foundation that is needed at these gas processing or well sites. For many of them, helical piles are a top candidate; they go in faster and they can even be unscrewed out of the ground, so they are a good option for non-permanent foundations as well.”

Further evolution
After a year spent laying groundwork for the company’s future, Bill is now hoping that ShalePro will be able to gain a more even balance between its midstream clients, upstream production work, and renewables division. “If we can get one third production, one third midstream, and one third renewable natural gas clients, that would be beautiful,” he declares. “It won’t happen next year because the renewables will take some time to catch up, but if we can get there the year after that, I would be very happy with the balance.”

As Bill alludes to, further evolution is on the way for ShalePro, a company that has remained successful in even the slowest parts of 2020 thanks to its extensive and diverse service range. When drilling activity was postponed and production delayed, the firm continued with its day-to-day operations comand maintenance-based work, whilst its competitors with a narrower focus were hobbled by the downturn. Having weathered the storm of 2020, and positioned itself to capitalize on the market’s resurgence, it is hard to imagine anything the business world could throw at ShalePro in the next five years that the company couldn’t handle.