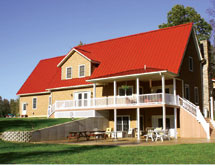 Glen Graber says he believes the company’s start was the result of a miracle. In 1969, his mother was dying of cancer and prayed that her family would be able to form a company that would bring them out of poverty.

Four years later, Glen Graber formed GPB, which had a staff of four and specialized in constructing pole barns. “We started it in an old beater van,” he recalls. “We did subcontractor work, and it grew from there.”

Today, GPB employs a staff of 250 and still constructs pole barns, along with commercial buildings, churches, community centers, apartments and office buildings. Additionally, the company has become a leader in metal products and sells more than 30 million feet of roll formed metal each year.

GPB ships to more than 120 wholesale distributors in more than 25 states and Canada. “We actually bring in steel in big rolls [and then] cut it to lengths,” Glen Graber says. “We also manufacture wood roof truss systems.

“We do reroofing work,” Glen Graber adds. “Whether it is housing or big commercial buildings, we build from scratch.”

Last year, the company had sales of $100 million and enjoys repeat business among its diverse customer base. GPB has earned client loyalty by remaining professional in its work, Glen Graber asserts. “If people will remain humble, thankful and treat people like they want to be treated, that goes a long way,” he states.

Keeping it Simple
After 39 years, Glen Graber is still managing his company. “I can’t seem to get rid of my job,” he jokes. While his son Jonathan served as vice president of operations, he is currently on sabbatical.

When managing the firm, Glen Graber likes to keep things simple, with a limited amount of changes. “If someone wants to change something, [I ask], ‘Is the juice worth the squeeze?’” he says. “Life is tough enough if you keep things as simple as possible.”

Glen Graber notes that the company likes to keep its structure simple, as well. “We don’t have layers of upper-level management,” he asserts. “If you’re the president or you’re in charge of sales or shipping, we don’t have two or three layers of people sitting around getting their hands dirty [in your work].”

However, its philosophy of keeping things simple does not mean GPB has shied away from utilizing new technology. “We’re very, very modern,” Glen Graber asserts. “Our manufacturing is state-of-the-art.”

For instance, after a devastating fire, GPB built new truss and trim manufacturing facilities, which gave its headquarters more than 300,000 square feet of production area. Additionally, in the following year, the company built a new, $1 million state-of-the-art facility for its offices.

This allowed GPB to make such additions as a computerized system that can duplicate any color sample. “As far as looking at any brand new processes or different ways to build them, we’re at the very top of what we can do,” Glen Graber says. “We’re also just about maxed out at our location in Indiana.”

Special Recognition
GPB has received many awards and recognitions for its work over the years, Graber says. Most recently, ProSales Magazine ranked the company as one of the top 100 construction suppliers in the nation.

This marked GPB’s third appearance in a row on the annual list, as it ranked No. 34. Operations Manager Bill Graber noted in a statement that the firm was proud to make the list again.

“This ranking is a reflection of the trust our customers have in Grader Post Buildings and the products we supply,” he said. “It also reflects on the quality of the employees we have at GPB and the work they do. I also believe this shows we’re a large player in the national market and we continue to look to expand and grow our company with great products and services.”

The company also recently won the Gold Key of Excellence Award for the seventh year in a row from Rural Builder Magazine. According to GPB, judging criteria included quality of materials, level of service, dependability and competitive pricing.

Glen Graber says these awards often keep workers performing strongly. “[An employee has] to do good work,” he says. “You can be kicked out if you don’t do what’s right.”

A Tight Ship
When it has come to the economic recession, GPB has “been really, really blessed,” Glen Graber says. “A couple winters ago, it got slower.

“We feel like we’re as competitive as we can be,” he continues, noting that GPB runs a tight ship.

Glen Graber praises his entire staff for their work in holding the firm together. “They all do such a great job,” he says, adding that a large percentage of its workers are Amish and Mennonite. “We have a high percentage of people that grow up learning to work,” he says.